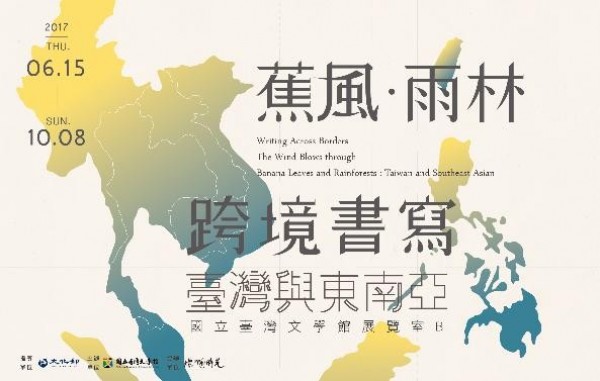 The National Museum of Taiwan Literature will share its collection of Taiwan-Southeast Asia literature in a special exhibition running in Tainan City from June 15 through Oct. 8.

Taiwan, a strategic hub in East Asia, has long served as the intersection point of many maritime and continental cultures. Carrying cultural trends and new knowledge from around the world, the island merges innovations gracefully with its traditions.

Given its geographical proximity, Southeast Asia and its wealth of cultures have traded more than just goods with the people of Taiwan. From migrating for marriage or career to pursuing trade, education, or personal adventures, such exchanges have culminated in splendid literary achievements.

Liao Chen-fu (廖振富), director of the National Museum of Taiwan Literature, noted that Southeast Asia is one of the most prolific overseas producers of Chinese-language literature. Highly distinct in its employment of different Southeast Asian cultures, languages, and histories, such literature is strung together by one common theme - close references to Taiwan and its people.

To explore this angle, the "Taiwan-Southeast Asia Literary Exhibition” will be offered in three sections - "Migration and Exchanges,” "Chinese-language Literature in Southeast Asia,” and "Shifting Borders.”

From factors in history and war to the influence of popular culture, migration will be examined from the perspective of literary writings, video recordings, travel logs, correspondence and letters, and even pop lyrics. The voices of migrants, spouses, travelers, and artists from the past two decades will help delineate more fully the intimate ties between Taiwan and Southeast Asia.