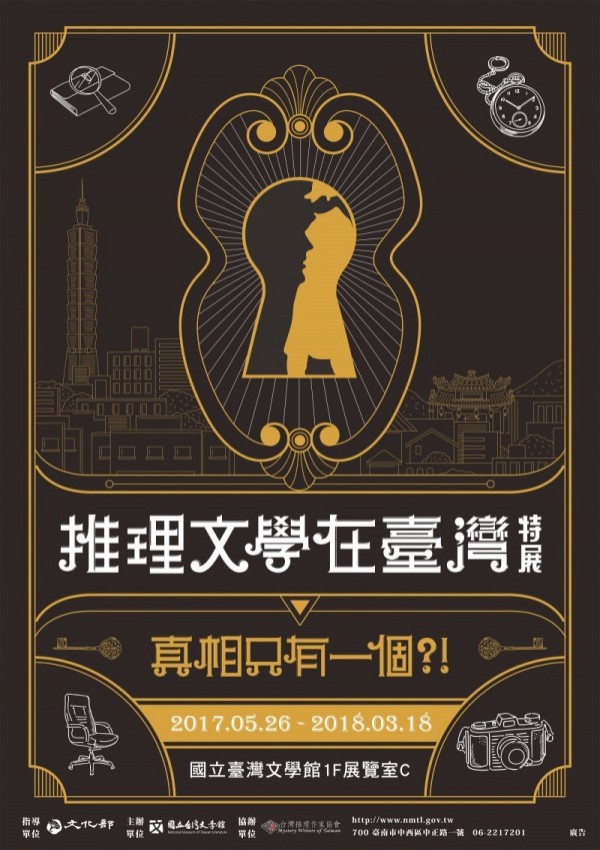 A special exhibition featuring the detective literature of Taiwan will be held at the Tainan-based National Museum of Taiwan Literature from May 26, 2017 through March 18, 2018.

A total of three sections will offer insights into the development and history of Taiwan's detective literature over the past century, and examine the genre's authors and their styles from the past to present day.

Roughly 100 cultural relics related to detective literature, such as a valuable copy of "Murder in Daytime (白晝的殺人)” written by Ye Bu-yue (葉部月) during the Japanese colonial era and the first issue of Mystery Magazine (推理), will be on display.

In addition, a mysterious crime has been laid out for exhibitiongoers to solve the murder case step by step by following clues hidden throughout the literature exhibition.

The first section, "X+Y=? - A Formula Called Reasoning,” will present how elements of time, space, victim, detective, perpetrator, motive, and method are integrated together to make an excellent fiction with mystery, high tension, reasonable problem-solving, and unexpected results.

The second section, "The Murderer We Tracked Down Together All Those Years - Imported Fictions,” will showcase "The Complete Sherlock Holmes” and "The Complete Arsene Lupin” that were translated and published in 1950s Taiwan. The two bodies of works remain the most celebrated detective fictions among Taiwanese readers today.

The third section, "Locally Produced, Locally Made - Original Detective Stories by Taiwanese Authors,” will re-trace the origin of Taiwan's detective fiction back to Kuroiwa Shuroku's (黑岩淚香) 1889 novel "Without Misery (無慘)” during the Japanese colonial era.

The section will also highlight Linbai Publishing (林白出版社), which started promoting original detective fictions of Taiwan in the 1970s and launched the Mystery Magazine, which featured translated literature from Europe, the United States, and Japan.

The publishing house also established the Fo'er Lin Awards for Detective Novels, which has served as a driving force to encourage more local writers to devote time to this particular genre.

NMTL Deputy Director Hsiao Shu-chen (蕭淑貞) noted that as Taiwan has been a haven for Chinese-language fiction in recent years, the museum will now focus on working with the Mystery Writers of Taiwan (臺灣推理作家協會) association to promote Taiwan's mystery novels in regional markets such as China, Japan, South Korea, and Thailand.

'Detective Fiction in Taiwan: Is There Only One Truth!?'