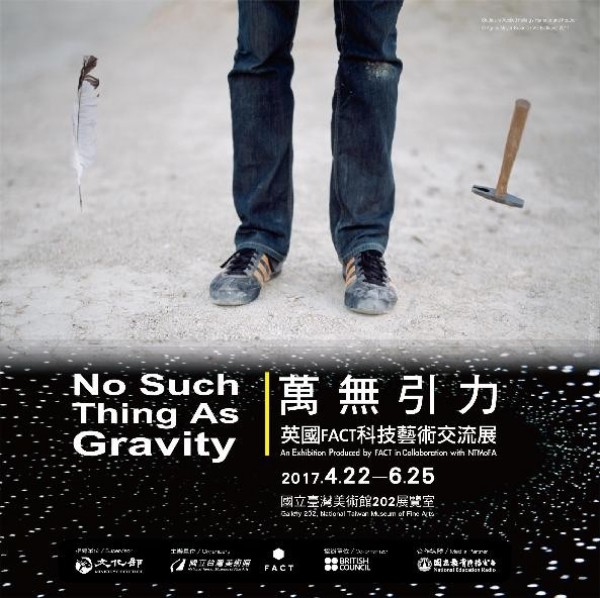 What is the nature of scientific truth? Explore the limits of science with global inquisitive artists in the joint exhibition "No Such Thing As Gravity” at the National Taiwan Museum of Fine Arts in Taichung.

Many members of the general public are under the impression that scientists agree on the same points and that the overall body of knowledge about the world is a fixed framework. However, as the exhibition title suggests, theoretical physicists remain in disagreement over what gravity actually is.

Thus "No Such Thing As Gravity” worked with scientists and artists to address how science is a continual quest for knowledge even when the absence of established facts may leave room for alternative science, conspiracy theories, and irrational beliefs.

"No Such Thing As Gravity” is curated by Rob La Frenais, one of the first curators to ever experience zero gravity in space, and Mike Stubbs, director of Liverpool's Foundation for Art and Creative Technology (FACT).

Chen, 39, is a Taiwanese artist who primary employs video as a medium for exploring the function of power in human society, nationalism, racism, totalitarianism, and collective (un)conscious. Her recent works also recruits photos, installations, and drawings to reflect on the relations between human behavior and the cosmos.

"Action at a Distance,” her contribution to "No Such Thing As Gravity,” describes a universe where both science and pseudoscience are justified means to understanding human life. The three-channel video installation addresses issues regarding the corporal body, human governments, and state-mandated violence.

"No Such Thing As Gravity” will run from April 22 through June 25 in Taichung.

'No Such Thing As Gravity'