A digital exhibition examining issues pertaining to Taiwan's environment and unbalanced development through a 360° video will be showcased at the National Taiwan Museum of Fine Arts from Feb. 18 through April 23.

Filmed by Feng Wei-chung (馮偉中), the video will present the difference in cultural landscapes and environmental conditions between Taiwan's eastern and western coasts through 360° aerial view. The footage expresses the visual appeal and discrepancies in nature and society as observed by the artist.

Specializing in animation, digital editing and special effects, video recording, motion graphics, and typography design, Feng currently serves as a professor at the Department of Communication Art of Chaoyang University of Technology.

Feng grew interested in aerial shooting three years ago, and gradually realized during the process of filming that it has become harder and harder to see pure blue skies due to air pollution.

Thus, Feng decided to raise public awareness of such environmental issues and the negative impact of industrial development by recording the distinct landscapes of eastern and western coastlines with his 360° aerial shooting technique.

Through editing focused on a sense of magical realism, images of Taiwan's eastern and western coastlines are transformed into a surreal composition reflecting great contrast between polluted landscapes and the untouched reserves. Feng aims to provoke thought on the island's unbalanced development and isolation amongst individuals.

The video consists of three chapters, of which the first focuses on the western and eastern landscapes that are divided by a composite planet-like sphere to show how they are worlds apart. The second chapter, on the other hand, presents an immersive landscape to bring attention to environmental pollution.

The last chapter consists wholly of 360° aerial footage, in which Feng has reversed the sky and ground. By combining the different ecological, cultural, and humanistic landscapes of the east and west coasts, Feng intends to show Taiwan from a different perspective. 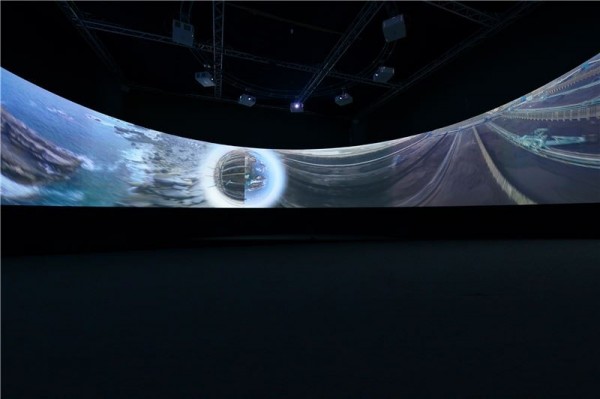