A special exhibition featuring jade items loaned by the Henan Museum will be available at the Taipei-based National Museum of History from Jan. 7 through March 12.

Jade has held political, economic, and religious significance for the greater Chinese community ever since ancient times. In the Henan region, the earliest jade artifacts can be traced back to the Neolithic period more than eight millennia ago.

As Henan made up a significant portion of the Central Plain, which served as the political center of several imperial dynasties, this region also became the cradle of jade development.

Starting from the Zhou dynasty (1046 - 256 BC), jade artifacts were integrated into the social code and elevated into ritual objects. Their rarity and unique coloring led people to conclude that jade held divine powers, and could be used to protect the body of the deceased.

One of the stoutest proponents of the divinity of jade was none other than China's first emperor, Qi Shi-huang (秦始皇). His imperial jade seal was carved with the couplet "Having received the Mandate of Heaven, the Emperor leads a long and prosperous life,” and his tomb was guarded with jade artifacts and terracotta soldiers.

By the Han dynasty (206 BC - 220 AD), jade burial suits interlaced either with gold wire, red thread, or silk were part of the funeral rites of the wealthiest aristocrat families. Each suit used up from 1,000 to 2,000 pieces of square jade and took years to make.

As jade become more common and widespread after the Han dynasty, they became accessible to more social castes and entered the household as objects appreciated for their aesthetic charms and auspiciousness.

This year marks the 90th anniversary of the Henan Museum, a sister museum of Taipei's National Museum of History (NMH). Marking the event is an exchange of collections, where over a hundred pieces of exquisite jade artifacts from the Henan Museum and 20 pieces of jade artifacts from the NMH collection that were excavated in Henan will be showcased in Taipei, whereas the NMH's Qing-era brocades will travel to Henan.

Updated on March 28, 2017: After the Taipei leg wraps up on March 12, 'Splendid Resonance' will travel to Kaohsiung and greet exhibitiongoers from April 1 through June 25 at the Fo Guang Shan Buddha Museum. 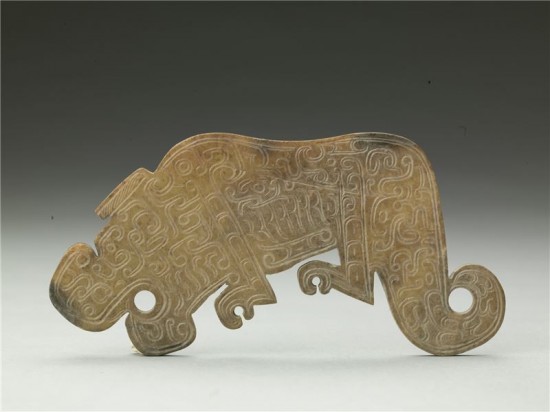