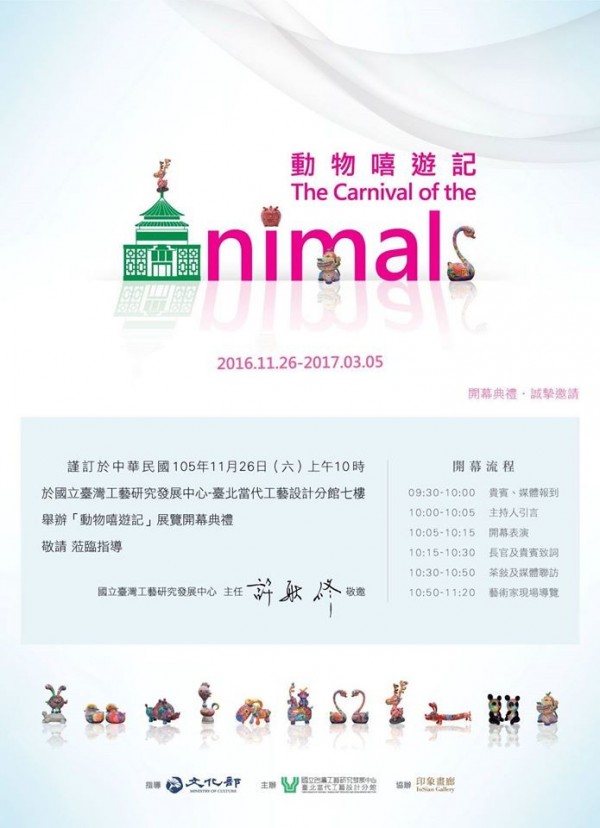 A sculpture exhibition featuring the whimsical menagerie of artist Hung Yi (洪易) will be staged at the Taipei Branch of the National Taiwan Craft and Research Institute to mark the first-year anniversary of the branch's establishment.

Hung, 46, is a former restaurant operator turned artist whose larger-than-life works are a delightful addition to any landscape or venue. His eye for color, cultural motifs, and pop art has created a parade of anthropomorphized sculptures equipped with individual character.

Hung's creations were part of the opening events for the 2016 Swinging Skirts LPGA Classic competition in San Francisco earlier this spring, and his "Fancy Animal Carnival” 11-piece collection is currently taking up the corners at Broadway Pedestrian Plaza in Garment District in NYC.

Hung has also donated a cheeky-looking draconic creature to the Asian Art Museum in San Francisco. Standing sentry at the museum's doorsteps, the hulking "Dragon Fortune” has been a hit with exhibitiongoers and is trending on social media under the hashtag #HappyDragon.

"The Carnival of the Animals” at the NTCRI Taipei Branch propagates the easygoing nature of the featured artist, as the 28 sculptures curated for the exhibition will be spread across three floors as well as the outdoor garden area.

His menagerie encompasses a 3.6-meter-tall rooster, which will roost on the open air plaza, a pair of lovey-dovey mallards, the symbol of eternal love in Chinese culture, and a grinning stallion carrying a monkey on its back.

The NTCRI Taipei Branch is a 1958 historic venue designed with Chinese palatial elements such as peacock-green glaze and a three-layer imperial dome. Upon restoration, the building was inaugurated as the Taipei Branch of NTCRI - Taiwan's premier crafts agency - in December 2015.

'The Carnival of the Animals'