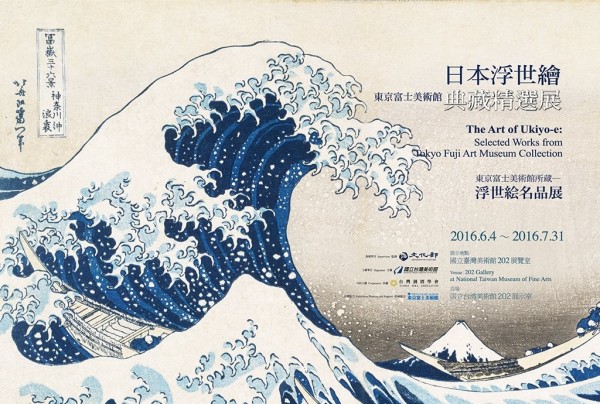 In an unprecedented scale of overseas cooperation among museums in Taiwan and Japan, a set of 100 ukiyo-e artworks from 19th-century Edo and Kamigata will greet exhibitiongoers in Taichung this June. Several of the woodblock prints have never been publicly exhibited before.

Ukiyo-e (浮世繪), or "pictures of the floating world,” was a Japanese art genre that originated with the hedonistic lifestyle of 17th-century Edo, the military seat of government in central Japan that became modern-day Tokyo.

Although the art form lost popularity at home by the late 19th century, its impact on the international community can be seen in such movements as Japonism, French Impressionism and Post-Impressionism.

In this exhibition, the artworks curated and loaned by the Tokyo Fuji Art Museum came from two distinct regions - Edo (present-day Tokyo) and Kamigata (present-day Kyoto and Osaka). The differences in popular culture, caricature, and aesthetics provide an added dimension of historic intrigue for exhibitiongoers.

Featured prominent printmakers and painters of the ukiyo-e style include Kitagawa Utamaro, who mainly painted beautiful women; Utagawa Toyokuni, who was renowned for his portrayal of actors; Utagawa Kuniyoshi, who produced satirical works; and Ryusai Shigeharu, who made a successful living by illustrating books.

The exhibition will also offer several prints from the two most well-known ukiyo-e series, "Fifty-three Stations of the Tokaido” by Utagawa Hiroshige and "Thirty-six Views of Mount Fuji” by Katsushika Hokusai. Hokusai's "The Great Wave off Kanagawa,” possibly the best-recognized Japanese art piece in the world, will be displayed in Taichung as well.

The cooperative exhibition between the Taichung-based National Taiwan Museum of Fine Arts and the Tokyo Fuji Art Museum follows a visit by a Taiwanese delegation to the Tokyo museum last December.