Home / What's New / Taiwan Exhibitions
'One of a Kind: The Legacy of Lin Chao-ying and His Family'
Print FB google plus twitter email
關閉視窗 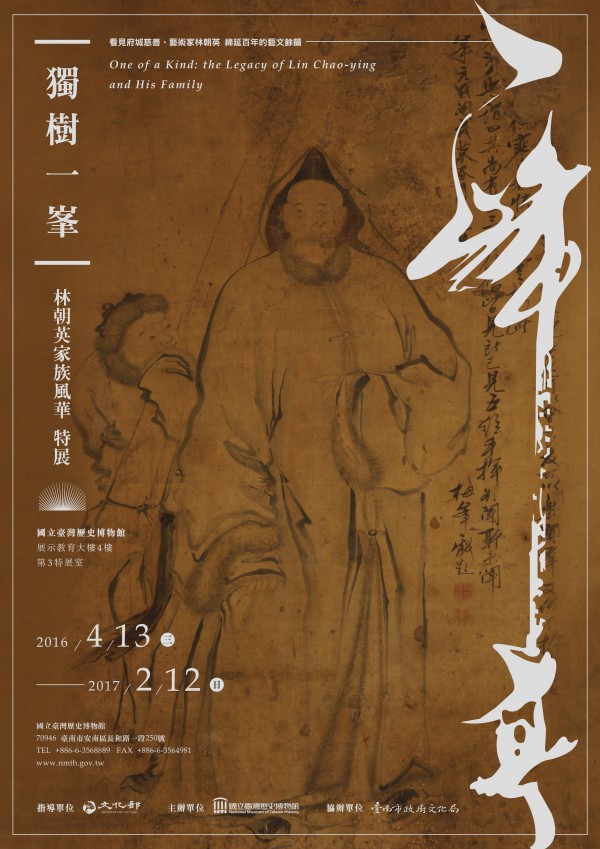 "One of a Kind: The Legacy of Lin Chao-ying and His Family,” a special exhibition on a Qing-era scholar and his lasting influence on southern Taiwan, will be available for viewing at the National Museum of Taiwan History from April 13 through Feb. 12, 2017.

The exhibition will offer glimpses of the erudite family based in Tainan City through artworks, pedigree charts, and receipts of daily expenses, as well as relics including chops, accounting records using the Suzhou rod numeral system, and contract papers donated by modern-day descendant Lin Shu-pin (林叔屏).

Lin Chao-ying (林朝英) was a renowned intellectual living in Taiwan during the Qing dynasty. He mastered the four Chinese scholarly arts and his achievements in calligraphy and painting were particularly admired. Japanese sinologist Hotsumi Ozaki (尾崎秀真) and post-World War II scholar Lu Chia-hsing (盧嘉興) both called him "the only true artist in Taiwan during the Qing dynasty.”

Apart from being an artist, Lin was also a philanthropist, artist, and a successful businessman in his time. For instance, when famine struck Taiwan and sent the price of rice soaring, Lin sold the rice he stored at a relatively low price that was within the public's means.

In addition, Lin had generously donated money he made from businesses and investments to expand Tainan city, repair the Confucius Temple, and offer disaster relief services.

Lin's self-portrait that once hung in the private classroom of his family house, his creation of a print template for calligraphy copybooks, and the money he offered to improve the educational environment all demonstrate his efforts in promoting literature, art, and propriety.

Lin's achievement in art, literature, and philanthropy had left a profound impact on his descendants such as Lin Shu-pin, the main donor to the exhibition whose photographs, diaries, book collections, paintings, and scrapbooks reflect the literary inheritance passed through generations. Today, Lin's scholarly life story has become important material for historical and literary research.

'One of a Kind: The Legacy of Lin Chao-ying and His Family'