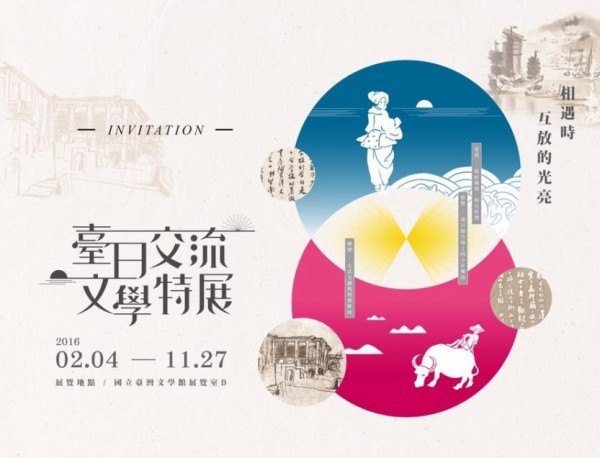 For centuries, Taiwan and Japan have engaged in literary, political, and social competition and collaboration. "Sparkling Encounters: Taiwan-Japan Literary Exchanges” at the National Museum of Taiwan Literature will present how bilateral interactions throughout history have shaped contemporary literature and sentiments.

In the early years, the two sides only had accidental encounters in the wake of maritime disasters, such as the incident of a Hokkaido merchant ship whose crew laid eyes on Taiwanese aborigines when the vessel drifted to Taiwan proper in 1803.

Then, in 1874, Japan launched a punitive expedition to Taiwan in what became known as the Mundan Incident (牡丹社事件), in retaliation for the murder of 54 Ryukyuan sailors by Paiwan aborigines.

Japan began to cultivate Taiwan as a "model colony” in 1895, and the interactions between Taiwan's local culture and imperial colonialism gave rise to exclusion, competition, cooperation, and exchange.

Following the end of World War II in 1945, colony-suzerain state relations gave way to equal standings, and both nations embraced political democratization and multi-cultural societies. Moreover, the influence of Japan's colonization can still be felt today, adding extra depth to contemporary exchanges between Taiwan and Japan.

The exhibition is offered in three sections. "Take A Look” centers on the initial encounters and new experiences; "Think It Over” explores the sparks of impact, competition, and cooperation that stem from regular encounters; and "Fondness” portrays the mixed attitudes toward the cultural legacy of such history.

The exhibition is timed to coincide with the centennial anniversary of the building housing the literature museum. The building was completed in 1916, and served as the Tainan Prefectural Government during Japanese colonial rule.