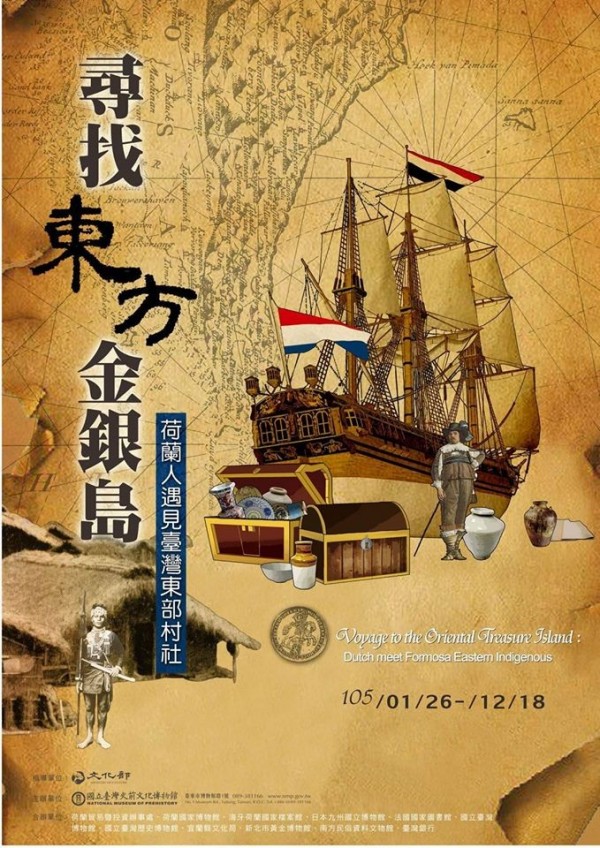 After two years of planning, "Voyage to the Oriental Treasure Islands: Dutch Encounters in Eastern Taiwan,” a special exhibition curated by the National Museum of Prehistory in cooperation with 11 domestic and foreign organizations based in the Netherlands, France, and Japan, will open from Jan. 26 to Dec. 18, 2016.

Four hundred years ago, Dutch explorers once sought for gold in eastern Taiwan, but were escorted by Puyama tribesmen back to their fort base in Tāi-uân (present-day Tainan) in southern Taiwan after their search efforts proved to be fruitless.

Four hundred years later, the friendship between the Netherlands and Taiwan is revisited in the "Voyage to the Oriental Treasure Islands” exhibition, marked by the attendance of Representative Guy Wittich of the Netherlands Trade & Investment Office at the Jan. 26 opening ceremony. Wittich also presented the museum with a scepter symbolizing trust, love, and peace.

The special exhibition is offered in four sections — The Rise of the Great Navigation Era, Seeing Tāi-uân, Japan's Overseas Trade and Policy of Sakoku, and The Story of the Dutch Searching for Gold in Eastern Taiwan. The items on display are rich with historical depth and awash in shades of navigation and adventure.

The exhibition also includes a one-to-five scaled-down replica of a 17th-century Dutch wooden ship, as well as 120 artifacts on loan from Austria, France, Germany, the Netherlands, and Japan.

The National Museum of Prehistory will also offer a series of hands-on activities in which visitors can pan for gold during the Chinese New Year holidays.

'Voyage to the Oriental Treasure Islands'