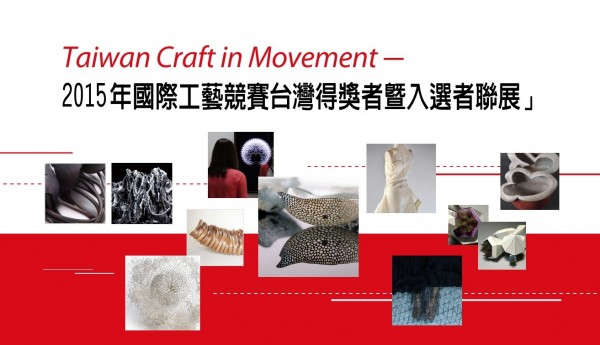 For those interested in the contemporary evolution of local craftsmanship, "Taiwan Craft in Movement,” a special exhibition showcasing recent Taiwanese crafts that have seized international awards, will run in Taipei from Dec. 19 through Feb. 28, 2016.

The diversity of local craftsmanship is reflected in the collective talents of the nine featured artists, an eclectic group that includes three hailing from the field of fiber arts, three metalsmiths, and one each from the areas of ceramics, bamboo crafts, and porcelain enamel.

Metalsmith Ou Jiun-you (歐軍佑) was the first artist from Taiwan to ever win a prestigious TALENTE prize in Munich; enamel artist Wu Ching-chih (吳竟銍) won the top prize in the 2014 ITAMI International Craft Exhibition hosted by Japan; and Lin Tsang-hsuan (林蒼玄) walked away with the Silver Prize at the 9th Cheongju International Craft Biennale Competition.

Event organizer, the National Traditional Crafts Research and Development Institute (NTCRI), noted that the annual showcase of artists entered in international competitions was established in 2005. In recent years, however, local artists have gone from "participants” to "winners,” indicating a steady period of artistic maturity and talent development over the past decade.