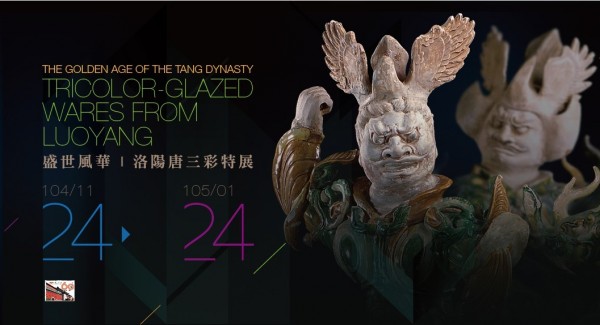 Characterized by a distinct yellow, green, and white glaze, the highly recognizable pottery works from the imperial Tang Dynasty will reappear briefly in the public eye from Nov. 24 through Jan. 24, 2016.

Organized by the National Museum of History in Taipei, "The Golden Age of the Tang Dynasty: Tricolor-glazed Wares from Luoyang” offers human and animal figurines, burial gifts, vessels, and everyday wares from the Henan city of Luoyang, which once served as the capital of several ancient empires.

As the Eastern Capital of Tang Dynasty, Luoyang was also one of the first excavation sites that led to the discovery of tri-colored pottery. During the 20th-century construction of the Longhai Railway, workers stumbled upon a cluster of tombs housing Tang artifacts that surprised the world with their flamboyant colors and impressive bulk.

Today, further studies on a wider range of samples have concluded that Tang pottery actually used up to six glaze colors. Such advanced techniques, coupled with innovations in form and décor, offer a glimpse of the prosperity that was the Tang Empire.

'The Golden Age of the Tang Dynasty'