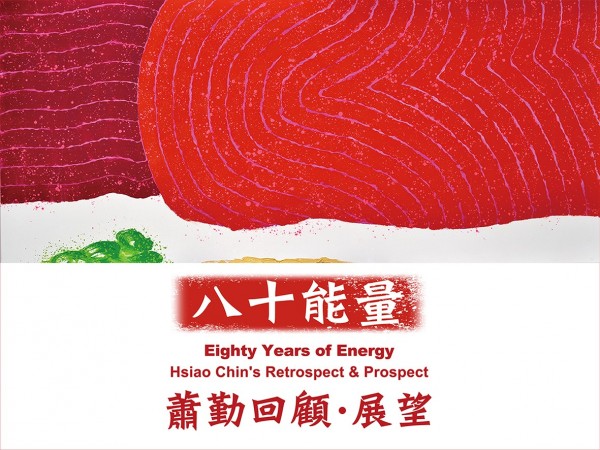 "Eighty Years of Energy,” a retrospective exhibition on the brimming creativity of artist Hsiao Chin (蕭勤), will run from Oct. 9 through Jan. 10, 2016 at the National Taiwan Museum of Fine Arts in Taichung City.

Hsiao, aged 80, named his exhibition after his ambitions to maintain a creative output undeterred by aging. As one of the pioneering artists in post-WWII Taiwan, the prolific abstract painter and sculptor has upheld an adventurous spirit throughout his 65 plus years as a professional artist.

Born in Nationalist Shanghai in 1935, he lost both his parents at a young age and consequently relocated to Taiwan with his uncle in 1949. Here, he began art lessons under the mentorship of Li Chun-shan (李仲生), an avant-garde abstractionist who introduced Western art theology to Taiwan.

Hsiao too, played a crucial role in "liberating forms” by adopting and promoting abstract expressionism. He co-established the Orient Painting Society (東方畫會) with Li's pupils, and published articles that kept Taiwanese artists abreast of the latest trends espoused by the international art community.

The free-spirited Hsiao also chose to take the path less travelled, preferring to surrender a scholarship from Spain after discovering the conservative nature of the art academy. Instead, he spent the bulk of the past sixty years overseas, living in Italy and working in Paris, London, and New York.

Championing a stream-of-consciousness creative process and the essence of Chinese aesthetics, Hsiao was involved in international art movements such as the dot-driven Punto in 1961, Surya in 1977, and Shakti in 1989.

He was also responsible for bridging art communities, helping Orient Painting Society members exhibit their works in Europe and arranging for Spanish avant-garde works to be shown in Taiwan.

Widely regarded as one of Taiwan's "Eight Pioneers of Modern Painting,” Hsiao's contemporary relevance and embracement of Neo-Taoism can be seen from the 155 pieces selected by the museum for the retrospective exhibition. Encompassing oil paintings, acrylic paintings, ink paintings, ceramics, and mosaic murals, many of these works have never been shown in Taiwan before.