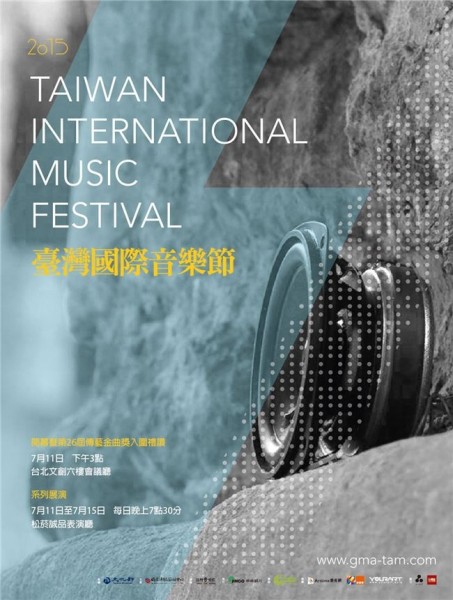 The 2015 Taiwan International Music Festival, the first comprehensive government-organized traditional music festival in Taiwan, will take place from July 11 to 15. Held to support both preservation and innovation in traditional music, the five-day event will feature both foreign guests as well as nominees and winners of the Golden Melody Awards for Traditional Arts and Music.

Since its appointment as organizer of the traditional categories of the Golden Melody Awards in 2014, the National Center for Traditional Arts has unrolled a series of supporting measures and incentives for promoting outstanding nominees and winners. The Center also envisions the upcoming festival as becoming an international platform for exchanges in music and the arts.

Slated to be held in the Eslite performance hall at the Songshan Cultural and Creative Park in Taipei, the festival will kick off with foreign music groups such as Kammerensemble Neue Musik Berlin of Germany and Park & Miyeon of South Korea.

Kammerensemble Neue Musik Berlin is a German contemporary music ensemble whose repertoire for Taipei will include works by Lai Deh-ho (賴德和), winner of the 25th Golden Melody Awards for Best Creation. While Korean percussionist Park Je Chun and his pianist wife Miyeon have formed a duet pioneering the fusion of Western Jazz with traditional Korean music.

Germany-based Taiwanese conductor Liao Xiao-ling (廖曉玲) will also partner with Neue Musik Berlin to hold a workshop series at the Center's Yilan headquarters in early July to refine the abilities of Taiwanese musicians and composers to interpret music through joint rehearsals and explanations. The results of the workshop will be presented at the Traditional Music Hall in Yilan on July 10.

Activities leading up to the 2015 Taiwan International Music Festival will kick off on July 5, and the festival will officially open concurrently with the announcement of the nominees for the 26th Golden Melody Awards for Traditional Arts and Music on July 11.