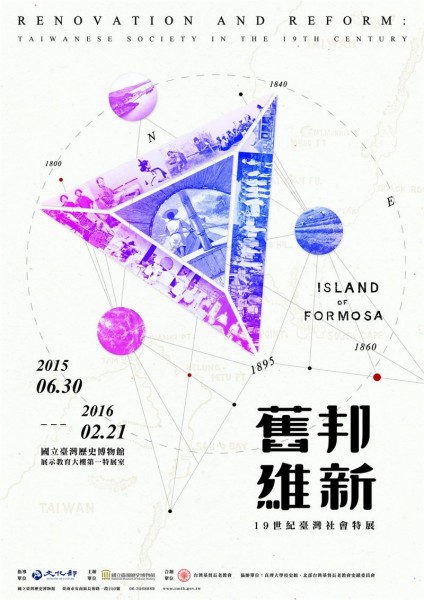 Who were those people on Taiwan more than 200 years ago? What kind of life did they lead and what were the favorable or unfavorable turns in their paths? "Renovation and Reform,” a special exhibition showing at the National Museum of Taiwan History from June 30 to Feb. 21, 2016, will lead visitors to revisit 19th-century Taiwanese society through its collection of historic images, maps, manuscripts, and illustrations.

During the 19th century, when Western powers swept the world with political and economic clout under the banner of trade, the residents of Taiwan － aboriginal people and Han immigrants, as well as Western explorers, merchants, and missionaries－ had no other choice but to face the foreign tides of cultural and economic power.

They could not escape from the political struggles, economic competition, cultural influences, and racial strife, so people in Taiwan chose to face the challenges and find their own way to survive. They were eventually able to resolve the internal problems of a traditional Chinese society by taking inspiration from Western schools of thought, thereby bringing out the unique values of Taiwan's island culture.

The six sections of the exhibition will start with a collage of images offering visitors a true glimpse of Taiwan's 19th-century residents － aboriginal people, Han immigrants, and Western explorers, merchants, and missionaries, who frequently interacted with one another across the island.

Next on display will be the scientific inventions, maps, and ship models of the section titled "A Rapidly Developing Globe,” which hopes to help visitors gain a better understanding of world development under the mounting trend of global influences.

In the third section, contract papers, government decrees, and historic documents will illustrate the daily interactions among ethnic groups, disputes between officials and civilians, and economic transactions when Taiwan was under the Qing Dynasty's imperial rule.

The "Taiwan's Opportunities and Challenges” section will then use Western books, maps, manuscripts, and media to recount the opportunities and challenges Taiwan faced under the global circumstances of the 19th century.

The fifth section, "Western Religions in Taiwan,” will use manuscripts, relics, and photographic images of missionaries to delineate the duality of Western influences - materialism and cultural enlightenment.

The last section will summarize Taiwan's transition from a traditional community of immigrants to a multi-cultured modern society. Under the impact of industrialization, urban development, and heightened social consciousness, a new generation of Taiwanese residents greeted the 20th century.

Among the artifacts gathered for the "Renovation and Reform” exhibition, several rare items will be exhibited for the first time at the National Museum of Taiwan History, including the first movable-type print press and the first hand-operated lift in Taiwan, and the cane and chop used by the late missionary George Leslie Mackay.