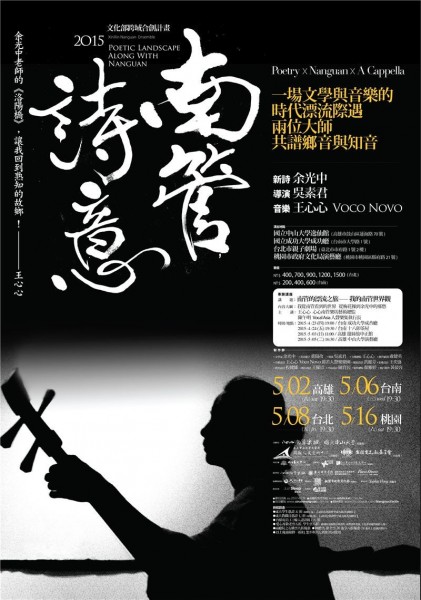 Wang Xin-xin (王心心), founder of the ensemble, first sang two songs that featured lyrics adapted from Yu's poems, including the well-known "Luoyang Bridge (洛陽橋),” at a nanguan concert organized by the National Taiwan Museum of Literature in 2013.

Yu, who attended the event, was moved by her composition and agreed to collaborate on five additional poems. "Her singing resonates with my heart,” he stated.

Their collaboration won inclusion in the Ministry of Culture's Rainbow Initiative for multi-disciplinary cultural projects, and four concerts featuring additional vocals from the Voco Novo A Cappella Group will be held in Kaohsiung City, Tainan City, Taipei, and Taoyuan City to showcase the unique blend of modern Chinese poetry with the ancient music style of nanguan.