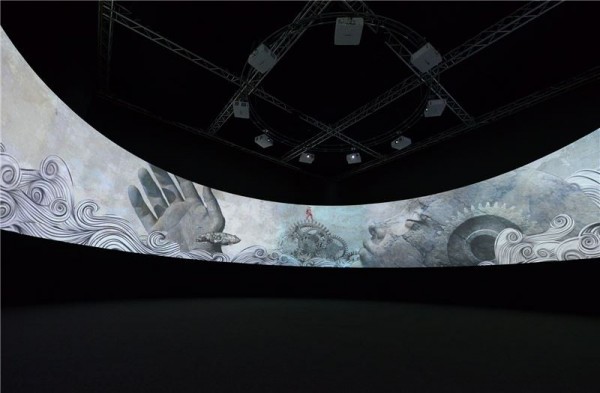 By combining his sailing experience with a 360-degree circular projection, artist Tai Chi-hsien (戴吉賢) has created a ten-act animated voyage of magical realism based on the issue of unbalanced development between civilization and nature.

The term of "imaginary voyage” comes from Tai's maritime terminology, meaning that when a ship has sailed for a very long time without docking at shore or seeing any land, the space and time outside the ship seem to stop flowing and human senses gradually become paralyzed.

People on board are like beings in a pure state, with their consciousness and imagination gradually divorced from reality. Thus, Tai's "imaginary voyage” extends from a boundless, physical space to poetic imagination, crossing geographical barriers and invisible psychological boundaries.

In the projected animation, Tai's Odyssey slowly sails through ten sets of different scenes, such as doomed lands piled with industrial waste, the realm of dreams with colorful goldfishes and floating red lanterns, and a utopia in which steel fortresses echo with black fireworks. The magical world in which all these symbols appear in alternation presents Tai's reception of how modern civilization has lost its direction just like a disorientated sailor.