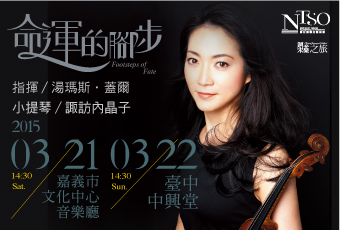 Japanese violinist Suwanai remains the youngest winner of the International Tchaikovsky Competition, a title she captured in 1990. Suwanai also placed second in the Queen Elisabeth Music Competition in 1989 and has been described by The Times as 'a tall, imposing violinist of striking stage presence.'

She will be performing Mozart's 'Don Giovanni Overture,' Nielsen's 'Violin Concerto Op. 33,' and Beethoven's Symphony No. 5 in c minor ('Fate' Op. 67), while Tamás Gal, head of the Budapest Concert Orchestra, will be the conductor of the two concerts.

Tickets are available through the NTCH's online ticketing system. For more information about the concerts, please call the NTSO at 04-2333-0153.