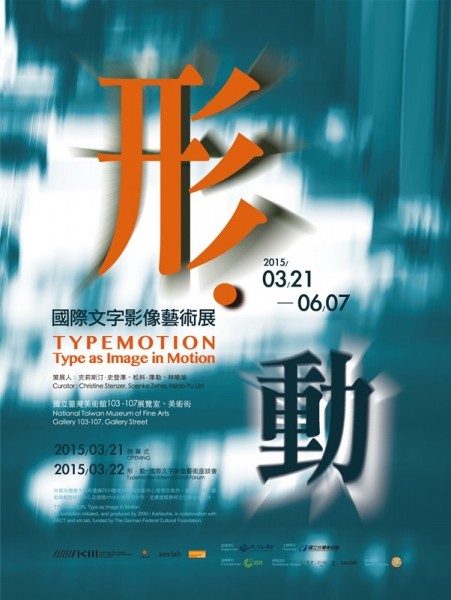 "TYPEMOTION,” an international traveling exhibition featuring 159 outstanding examples of text and typography being used in motion, will be shown at the Taichung-based National Taiwan Museum of Fine Arts from March 21 to June 7, 2015.

Artists from 15 different countries have combined typography with artistic films, videos, and new media art works to produce feature films, title sequences, commercials, music videos, and computer games. Ranging from as early as 1897 to the cusp of this year, the displays demonstrate the ingenuity of using type as an art form.

Visitors will recognize the title sequences to classic films like "Psycho,” "Gone with the Wind,” and "Se7en,” riveting imagery from "The Matrix,” "Alien,” and "Star Wars” series, as well as retired advertisements for global brands such as Audi and Maxell. Works by Italian master Marc Duchamp and German-Austrian filmmaker Fritz Lang are also part of the collection.

Twelve Taiwanese works, including a multimedia installation that allows visitors to generate their own visual poetry via smartphone, will also be shown at the exhibition, thus tying the curatorial content to local subject matters and bolstering the artistry of traditional Chinese characters.

"TYPEMOTION” is an international research and exhibition project initiated by ZKM | Karlsruhe, in collaboration with FACT and xm:lab, and funded by the German Federal Cultural Foundation and the Goethe-Institut Taipei. More information on the Taiwan edition of the traveling exhibition can be found at the event page here.