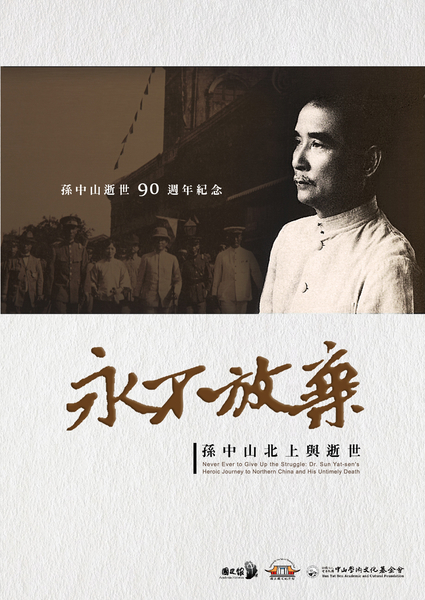 To mark the 90th demise anniversary of Dr. Sun Yat-sen (國父 孫中山), the founding father of the Republic of China, the National Dr. Sun Yat-sen Memorial Hall in Taipei will hold two daily screenings of a historical documentary on Dr. Sun's last days between March 12 and 30.

"Never Ever Give up the Struggle: Dr. Sun Yat-sen's Heroic Journey to Northern China and His Untimely Death” was produced by the Sun Yat-sen Memorial Hall in cooperation with the Academia Historica (國史館) and the Sun Yat-sen Academic and Cultural Foundation (中山學術文化基金會). Released last month, the documentary cherishes the memory of the man who overthrew the Manchurian Qing dynasty and established the first democratic republic in Asia.

In particular, the documentary focuses on the period that takes place 12 years after the founding of the Republic of China. The Second Chihli-Fengtien War (第二次直奉戰爭) broke out in 1924, leading Dr. Sun to travel from Canton to Beijing at the invitation of Generals Duan Chi-jui (段祺瑞), Feng Yu-hsiang (馮玉祥), and Chang Tso-lin (張作霖) in northern China to discuss state affairs.

As they passed through Shanghai, Kobe (Japan), and Tianjin, Dr. Sun and his traveling party promoted democratic proposals such as the right to hold national conventions and the abrogation of unequal treaties. Unfortunately he was unable to realize his goals and became stranded in northern China before passing away from illness in Beijing in March 1925. His coffin was then temporarily interred at the Temple of Azure Clouds located in the Western Hills of Beijing's northwestern suburbs.