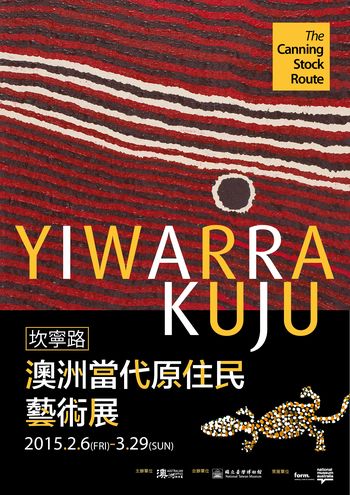 A traveling exhibition from Australia will showcase aboriginal art inspired by the world's longest historic stock route, the Canning Stock Route, at the National Taiwan Museum from Feb. 6 through March 29, 2015.

Running from Halls Creek in Western Australia to the mid-west Wiluna, the Canning Stock Route was first established by Alfred Canning in 1906. The 1,850-kilometer path bridged 3 deserts and 9 aboriginal strongholds, and served to help eastern cattlemen drive their cattle herds to sell on distance markets.

Canning was lauded for finding the best watered stock route in an extremely barren and destitute terrain, but later reports pointed to his mistreatment of aborigines (whom he chained to force cooperation in finding local waterholes). Moreover, the European-style wells he constructed required the strength of 3 men or the use of a camel, rendering these traditional soaks inaccessible to aborigines.

The construction, enforcement, and maintenance of the Canning Route was considerable; however, the track was impractical for cattle drives and forever impacted the cultural, familial, and social patterns of Australia's aboriginal people. On the other hand, it provided a way out of the desert and triggered an unprecedented dispersion.

To tell the story of the stock route's impact from an aboriginal perspective, the National Museum of Australia and independent cultural organization FORM spearheaded "Yiwarra Kuju,” meaning "one road” in the Martu language, to collect paintings, contemporary cultural objects, and documentary material to preserve the "first voices” of oral histories.

In one participant's words, "we wanna tell you fellas ‘bout things been happening in the past that hasn't been recorded, what old people had in their head. No pencil and paper. The white man history has been told and it's today in the book. But our history is not there properly. We've got to tell ‘em through our paintings.” 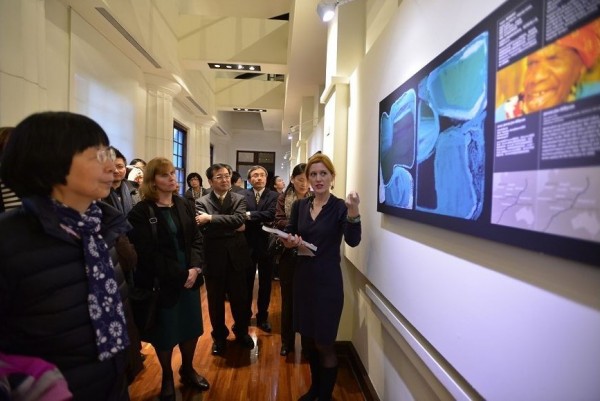