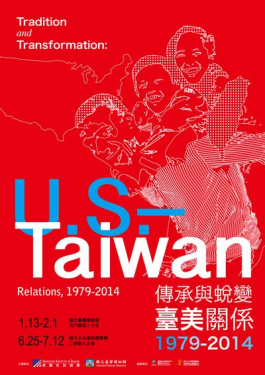 An exhibition chronicling the development of ties between the Republic of China (Taiwan) and the United States (U.S.) in the past 35 years will be held at the National Taiwan Museum's Nanmen Park in Taipei from Jan. 13 through Feb. 1.

Titled 'Tradition and Transformation: U.S.-Taiwan Relations, 1979-2014,' the exhibition displays photos, historical documents, and memorabilia focusing on the development of the unofficial relationship between Taiwan and the U.S. over the past four decades ever since diplomatic relations were severed.

The exhibition includes stories of 'success and challenges' and ways that the U.S. and Taiwan have worked together after the signing and enactment of the Taiwan Relations Act (TRA) in 1979.

The TRA was enacted to maintain commercial, cultural, and friendly relations between the two sides, and pledges to help ensure peace, security, and stability in the Western Pacific. The law also requires the U.S. government 'to provide Taiwan with arms of a defensive character.'

The 'Tradition and Transformation' collection includes photos highlighting Taiwan's admission to the U.S. Visa Waiver Program in 2012 and Taiwanese military personnel under training in the U.S.

Also covered is a satellite project that resulted from a cooperative project between Taiwan and the U.S. that was launched in 2006. Called FORMOSAT-3, it is formed by a constellation of six micro-satellites and has been used to provide near real-time weather data.

After its run in Taipei, the exhibition will be taken to the National Library of Public Information in Taichung, where it will remain on display from June 25 to July 12.