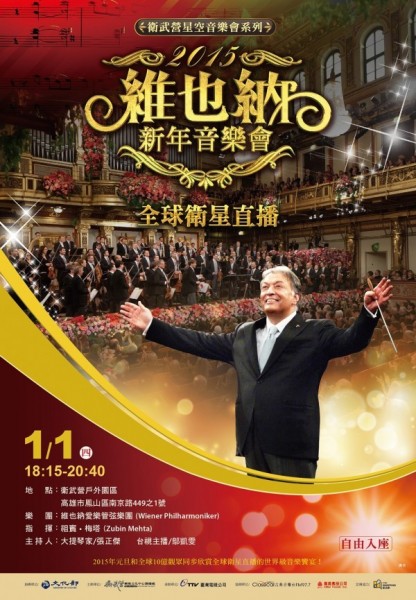 The Vienna Philharmonic's annual internationally acclaimed New Year's Concert will be broadcast live in Taiwan on Jan. 1 and streamed to outdoor locations in Taipei and Kaohsiung.

The concert, led by Indian Parsi conductor Zubin Mehta, will be broadcast live on Taiwan Television Enterprise (TTV) channel and large viewing screens will be set up outside the National Palace Museum in Taipei and the Wei-Wu-Ying Center for the Arts in Kaohsiung beginning at 6:15pm local time.

For more than a half century, the Vienna Philharmonic has performed the music of the Austrian Strauss family —Johann (senior), Johann (junior), Josef, and Eduard Strauss — on the morning of Jan. 1 in the Austrian capital of Vienna.

Tens of millions of people from more than 80 countries are expected to watch Tuesday's performance, which will be broadcast around the world.

This New Year will be the 13th year that TTV will broadcast the concert live in Taiwan. Seatings in Taipei and Kaohsiung will open at 6pm and the concert will last for two and a half hours.