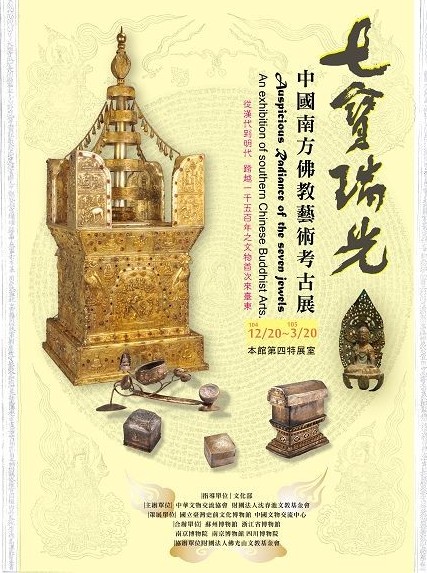 An exhibition on southern Chinese Buddhist artwork dating back from 1,500 years ago will open at the National Museum of Prehistory in Taitung City from Dec. 20 through March 20, 2015.

The 104-piece set contains items representative of Buddhist themes and aesthetics from over 15 centuries, spanning from the imperial Han Dynasty (206 B.C. - 220 A.D.) to the late Ming Dynasty (1368 - 1644). Twenty-some relics were loaned from the permanent collections of mainland China-based museums.

Among the exhibits, one in particular warrants special care and attention — a gold-glided wooden pagoda crafted during the Ashoka reign that is rumored to have held the sariras of Buddha himself.

Unearthed in 2008 from the site of the Porcelain Tower of Nanjing, the 109-kg pagoda is studded with the seven iconic gems named in the Lotus Sutra — gold, silver, liuli, crystal, coral, amber, and the shell of the giant clam — and bears inscriptions that allude to its precious cargo.

Visitors whose names containthe Chinese character for auspiciousness ("rui”) or light/radiance ("guang”) will be able to enter the exhibition for free.