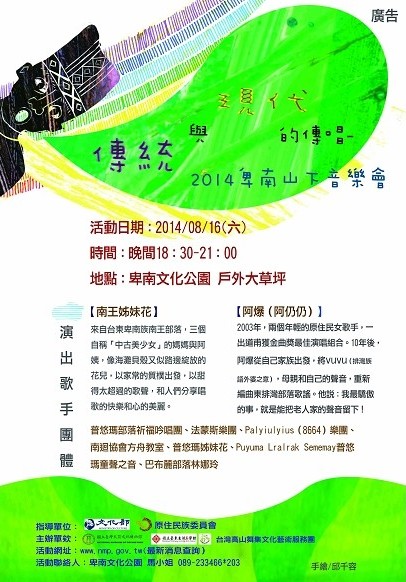 The National Museum of Prehistory will hold an outdoor concert at the Beinan Prehistoric Park on Aug. 16 to celebrate Taitung's aboriginal heritage through dance and songs.

Titled "Passing on Songs of Traditions and Modernity,” the 2.5-hour concert will also present the culminated efforts of the communities and tribes in Taitung, as the museum has coaxed local residents to partake in the event not only as concertgoers but also as performers.

The concert night will also feature two professional acts: the Golden Melody-winning Nanwan Sisters (南王姊妹花) and Puyama songstress Rengbow (阿爆). Their performances will include a dedication to the late Japanese anthropologist Yoshichika Iwasa (岩佐嘉親), who donated his life's work to the National Museum of Prehistory before passing away earlier this February.

This year marks the fourth edition of the Beinan Mountain Concert, which was first established in 2011 to promote aboriginal music. Find out more information by calling Miss Ma at 089-233-466 ext. #203.