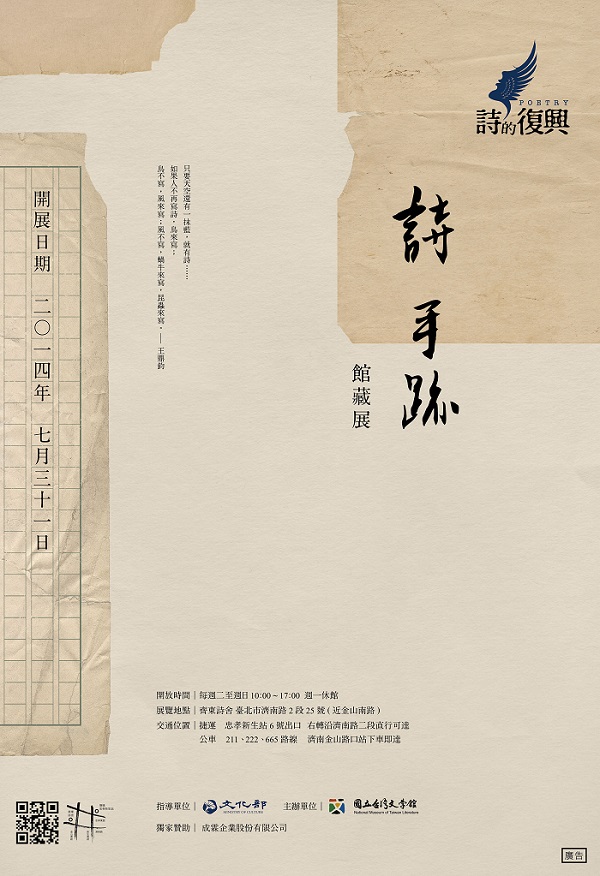 "Traces of Poetry” is the first public exhibition organized by the newly established Qidong Poetry Salon, a subordinate organization dedicated to the promotion and preservation of Taiwan's poetry heritage.

To offer visitors a detailed and comprehensive guide to the nation's literary wealth, the exhibition comprises five sections — The Beauty of Taiwan's Classic Verses, A Spectrum of Languages and Dialects, Poetry Across Borders, Poems and Songs on Formosa, and Commemorating Chou Meng-tieh.

Apart from manuscripts by the late poet Chou Meng-tieh (周夢蝶), who passed away earlier this year, the handwritten drafts and personal documents of 46 other Taiwanese poets are featured in the permanent exhibition.

Listed in chronological birth order, some of featured poets include:

A Qing loyalist and anti-colonialist who captured the sense of loss, disorientation, and the reconstruction of national identity following the territorial cession of Taiwan to Japan in 1895.

A politician and businessman, founder of both the Shulin Winery (樹林造酒公司) and the Weige Poetry Association (薇閣吟社), and an astute researcher of classic Chinese literature and neo-Taiwanese literature.

A member of one of the five most powerful families in Taiwan during Japanese colonial rule, and co-founder of many social movement groups such as the Taiwanese Cultural Association (台灣文化協會).

A humane poet with a medical degree who championed the Taiwanese New Nativist Movement in the belief that literature should address everyday life and concerns.

An established calligrapher and poet whose eloquent command of the language was used to convey dejection and disapproval of the ruling Japanese authorities, especially after the Marco Polo Bridge Incident in 1937.

Educated by the Japanese public school system and well-versed in classic Japanese "waka” poetry and haikus, he is noted for his impact on neo-Taiwanese literature despite his lack of written proficiency in Mandarin Chinese.

A poet born in the Japanese colonial era who lived to see Taiwan's retrocession; he pioneered many new forms of nativist literature, including the writing of haikus in the Taiwanese dialect.

A witness of the social and cultural transformation that took place in Taiwan following its retrocession; his departure from conventional prose writing took the form of personal and philosophical musings.

A dentist-turned-poet fluent in both Japanese and Mandarin Chinese; the bulk of his work explores the different aspects of Taiwan's collective consciousness in response to the forced introduction of Japanese culture.

A contemporary female writer whose tender, simple prose focused on interpersonal relations, childhood nostalgia, filial ties, the importance of honor in marriage, and the cost of absolute love.

A self-taught female poet who has released works in both Japanese and Mandarin Chinese. She is respected for her role in mentoring a new generation of Taiwanese writers and critics.

A pioneer of avant-garde Chinese literature whose minimalist style made little use of descriptive words. He also created symbolism poetry (符號詩), which uses the shape of Chinese characters to graphically represent the topic of the poem.

A female writer who wrote poetry in her native Hakka dialect, melding traditional Hakka values with her feminine sensibilities. She has also explored the poetic potential of English, Pekingese, and other foreign languages.

A Taiwanese concrete poet whose poetic works ignored typography conventions, employed alliteration and parallelism, and introduced new text symbols such as ● and ○. He was given the nickname "Railway Poet.”