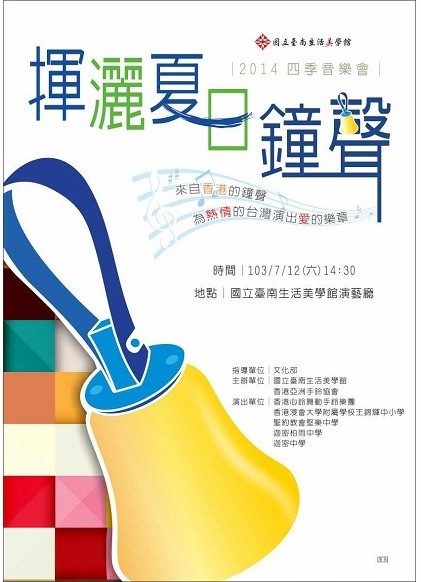 The unique chimes of handbells are coming to southern Taiwan on July 12, when the Hong Kong-based Asia International Handbell Association (香港亞洲國際手鐘協會) will hold a free afternoon performance as part of the National Tainan Living Arts Center's "Four Seasons Concert” series.

Handbells have their origin in Great Britain, where they were first developed in the late 1690s by a pair of brothers surnamed Cor in Wiltshire. The Cor brothers' fine-tuned bell sets were soon adopted by bell changers who used it to rehearse their belfry routines, and the handbells became increasingly popular during World War II, replacing church bells whose ringing would've signified an invasion.

The Asia International Handbell Association was established in 2008 to promote the time-honored performance of handbell music. Members have not only received official accreditation from the London College of Music Examinations, they are skilled in handling up to seven handbells per person.

For the Tainan performance, the Hong Kong delegation will include the association's handbell team and four middle school bands. The event is scheduled for a 2:30 PM start at the Tainan Living Arts Center. For more information, please visit the center's Chinese-language website at www.tncsec.gov.tw/ntnlac.