'Evacuation of the Dachen Islands' 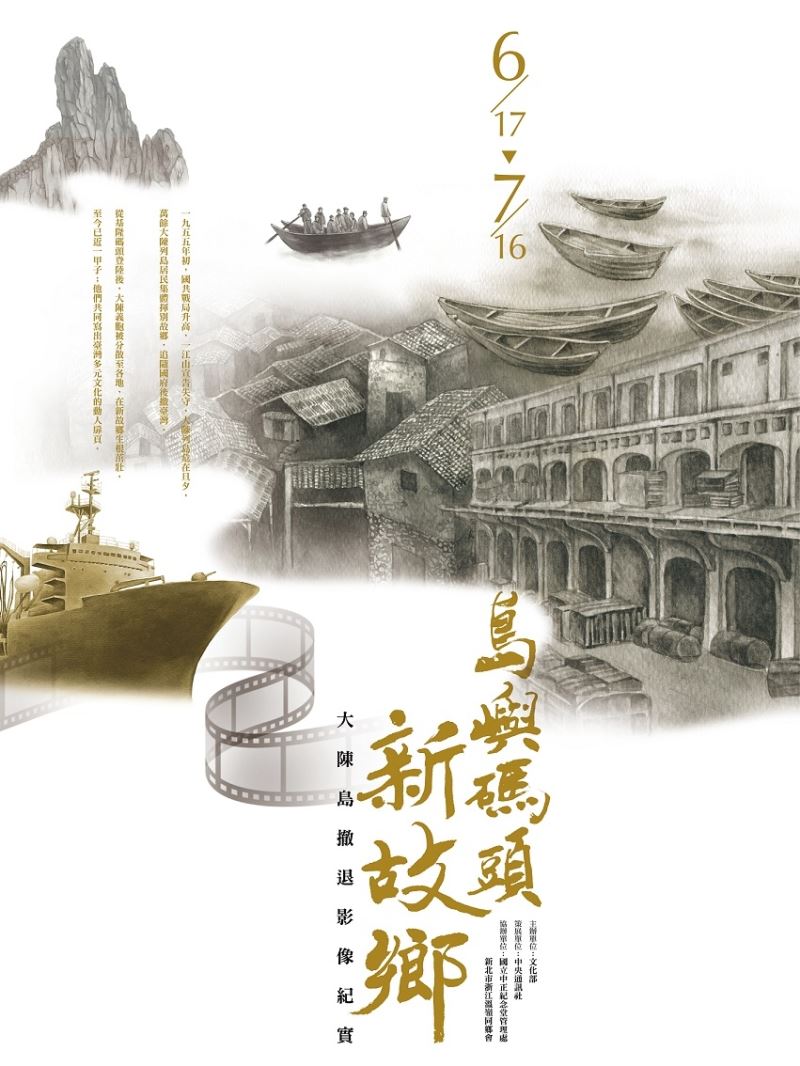 A photography exhibition on the historical evacuation of the Dachen Islands will be held from June 17 to July 16 at the National Chiang Kai-shek Memorial Hall in Taipei, ahead of the upcoming 60th anniversary of the mass retreat that saw 15,000 Nationalist troops and civilians relocate to Taiwan proper.

Organized by the Ministry of Culture and the Central News Agency, "Islands, Wharves, New Hometown: Evacuation of the Dachen Islands” will provide the general public with a rare glimpse of the years before and after the Dachen Retreat.

The Dachen Islands is a group of islands in the Gulf of Taizhou, off the coast of Zhejiang Province. These barren islands, whose residents make a living through fishing, unexpectedly became the focus of global attention in the history of the Chinese Civil War.

On Jan. 18, 1955, armed Chinese Communists in joint operations mode launched a heavy attack on Yijiangshan in the north of the Dachen Islands. Although seasoned Nationalist troops under the command of General Wang Sheng-ming tried to repel the enemy, the outnumbered defenders lost in the end. Since Yijiangshan served as an important defense barrier, its fall posed a serious threat to the safety of the Dachen Islands. Based on strategic considerations, the R.O.C. government decided to evacuate all troops and civilians from the Dachen Islands. The massive evacuation project was codenamed "Operation King Kong.”

Between February 9 and 14, 1955, more than 15,000 troops and civilians were evacuated safely to the Port of Keelung under the supervision of the R.O.C. forces and the U.S. Seventh Fleet. Despite being burdened with the memory of their forgone hometown, Dachen residents set foot on foreign soil and continued to grow and prosper in their new hometown — Taiwan — after experiencing historical and cultural transitions, exploring new land, and re-positioning themselves. Because of them, Taiwan now has an even richer and more diverse cultural background.

Through the six themes: "Isle of Heroes,” "A Glimpse of Dachen,” "Away from Home,” "Welcomes and Farewells on the Wharf,” "New Hometown in Taiwan,” and "Preserving Dachen's Cultural Heritage,” the "Islands, Wharves, New Hometown” exhibition presents the joyful and sorrowful years of the uprooted Dachen compatriots, with the hopes of strengthening the nation's collective memories and championing tolerance in a multi-cultural society.

Following the retreat of Nationalist troops from Zhoushan Islands, anti-Communist guerrilla forces flocked from various mainland provinces to gather on the Dachen Islands, making the island group an important anti-Communist outpost. The Nationalist government appointed General Hu Zong-nan to defend the Dachen Islands and reorganize the guerrilla fighters, and the Dachen Defense Command was established in July 1954. The 64th Division of the Nationalist Army was ordered to defend the main Dachen islands while Anti-Communist National Salvation Army troops took charge of defending the surrounding islands of Yijiangshan, Yushan, and Nanji.

In January 1955, Chinese Communists began bombing the main Dachen islands and its surrounding islands, and launched their first coordinated armed forces operations against Yijiangshan on January 18. After three days of bloody fighting, Nationalist troops on the island were vanquished in the absence of marine and aerial support and Commander Wang Sheng-ming committed suicide with a hand grenade. The Battle of Yijiangshan was a brutal battle that shocked both the R.O.C. and foreign countries, marking an unprecedented escalation of tension in the First Taiwan Strait Crisis.

Strategically located in Zhejiang Province's Gulf of Taizhou, the Dachen Islands are the partially submerged end of the Kuocang Mountains that stretch directly into the sea. With only a little flat land, the islands are packed with rough and rugged hills. Local residents generally built their narrow streets and houses with stones in accordance with the terrain, forming a unique landscape.

In terms of agricultural products, it was very difficult to grow crops on the barren soil of the Dachen Islands. Therefore, Dachen fishermen set sail even when there were strong winds and capsizing waves, braving the waters at high tide and returning with a full catch at low tide. Such adversity helped to shape Dachen's adventurous and persevering spirit.

After the fall of Yijiangshan, the Dachen Islands lost its northern protective barrier. Since Yijiangshan was only 10 nautical miles away from Upper Dachen, the fall of Yijiangshan had made the defense of Dachen precarious. Chinese Communist forces began immediate bombing of the Dachen Islands by day and night. Sometimes more than 20 air strikes were conducted in a single day, resulting in panic-stricken residents and frequent reports of civilian casualties.

In late January 1955, the Nationalist government decided to evacuate all troops and civilians from the Dachen Islands. Codenamed "Operation King Kong,” the evacuation was conducted by R.O.C. and U.S. navy forces between Feb. 6 and 12. The entire retreat operation came to a successful conclusion when the R.O.C. military completed "Operation Flying Dragon” — the evacuation of the remaining troops and civilians from Nanji Island — without U.S. assistance on Feb. 25.

The rapid transition and changes took place over the course of a very few days, from dodging air raids, waiting to fight to the death against the Chinese Communists, to boarding a U.S. warship and sailing to Taiwan, which was a place most Dachen residents had never even visited. The evacuees were not only overjoyed to survive, but also sad from being driven away from home. Nevertheless, they placed their trust in the Nationalist government and faith in a better future, and were determined to march forward without looking back.

Welcomes and Farewells on the Wharf

Eight wharf warehouses were built in the west area of the Port of Keelung in the 1930s during Japanese rule, but only Wharf W2 and W3 remained standing in the 1990s. During their long history, the two warehouses had witnessed historical events such as Taiwan's retrocession, the repatriation of Japanese soldiers after their defeat in World War II, the arrival of Chinese Communist soldiers who defected to freedom after the Korean War, and the evacuation of the Dachen Islands.

Upon their arrival in February 1955, the evacuated Dachen residents were greeted by slogans shouted in a dialect they did not understand by the welcoming crowd packed on the wharves of Keelung, a port several hundred times the size of the Lower Dachen bay. Following their arrival in Taiwan, they were bestowed a collective title to commemorate their valor — the anti-Communist Dachen compatriots.

Dachen compatriots following the Nationalist government to Taiwan carried only simple clothing, some cash, and deity statues, leaving most of their property and belongings behind. They encountered many difficulties as total strangers in a foreign land, but the government helped them register their aspired working fields and then settled them in Dachen compatriots' villages in Yilan, Kaohsiung, Pingtung, Hualien, and Taitung.

Half a century later, although many of the Dachen compatriots have emigrated to the United States and other parts of the world, Taiwan remains treasured as a new hometown that offered a new lease on life.

Taiwan is a society comprised of multiple ethnic and cultural groups. From aborigines to old and new immigrants from different places and different times, all live peacefully side by side on the island proper. Although new immigrants carry the memories of their old hometowns, Taiwan has matured to become a modern, democratic society that celebrates the diversity of its cultural factions.

The arrival of the Dachen compatriots has helped to introduce new elements that have enriched Taiwan's cultural roots. The spirit of the Dachen Islands also lives on in the memories of the Taiwanese people. Through the preservation and promotion of Dachen's cultural heritage, the "Islands, Wharves, New Hometown” exhibition hopes to pass the stories of Dachen's valor to future generations. 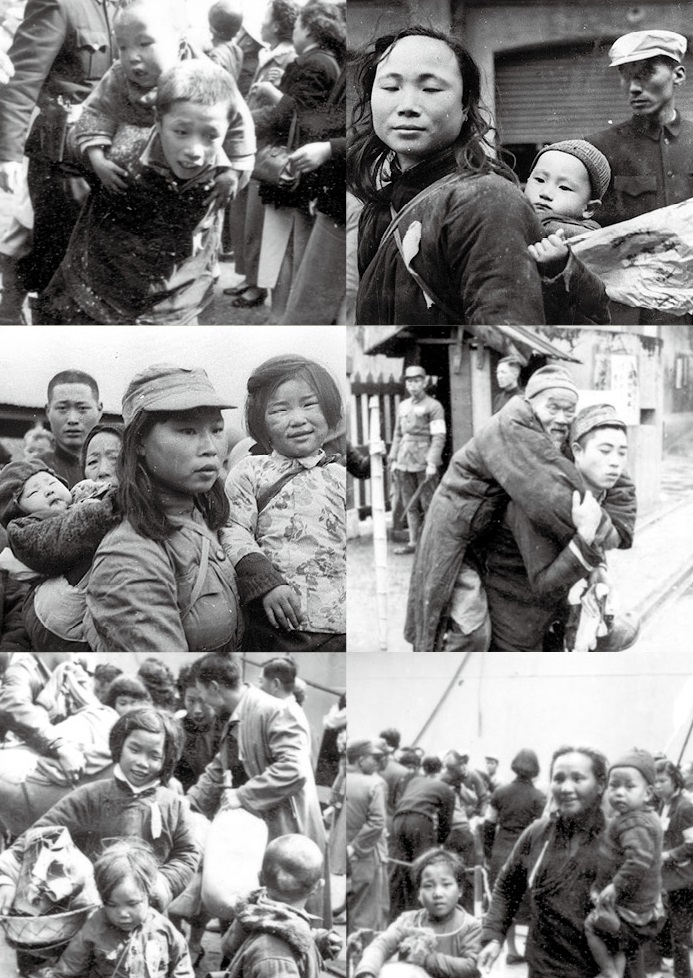