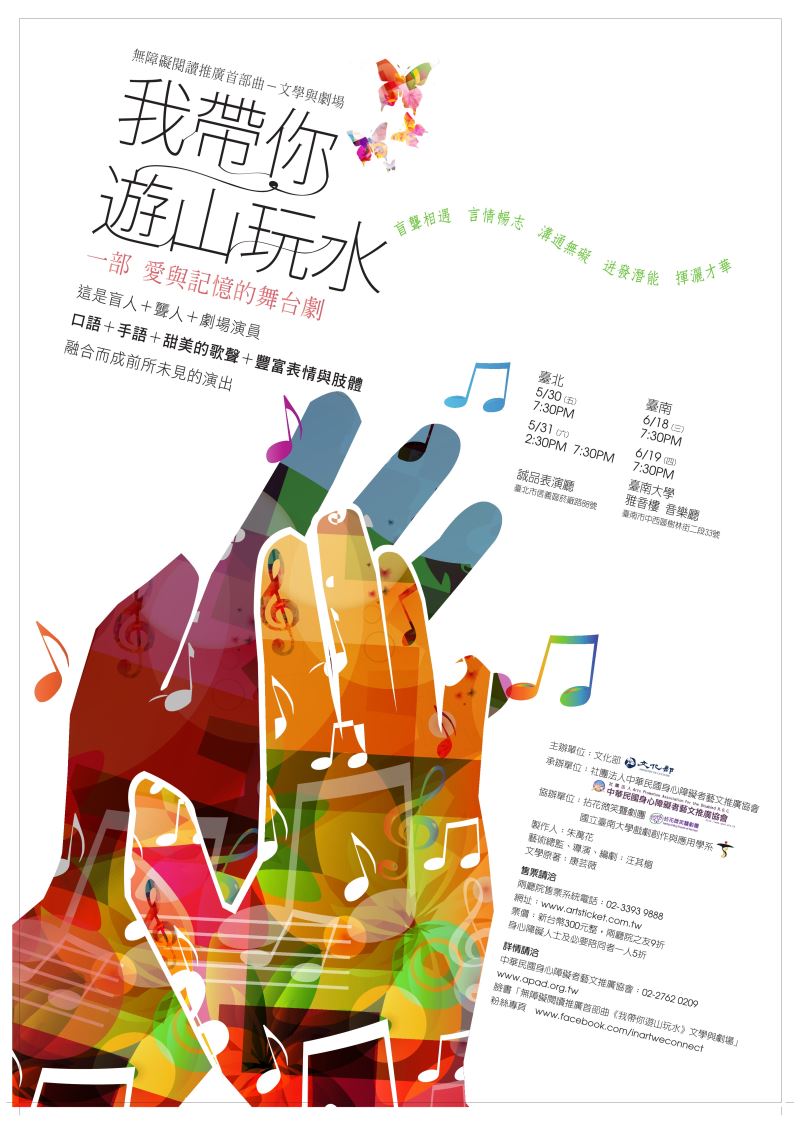 A cast of visual- and hearing-impaired actors will be performing in a special play slated for Eslite's performance hall in Taipei's Songshan Cultural and Creative Park on May 30 and 31, and at the National University of Tainan on June 18 and 19.

Despite being unable to see or hear, they've mustered enough courage and passion to convey such emotion to touch and inspire in a stage performance that was adapted from Taiwanese writer Kang Yun-wei's (康芸薇) prose collection 'I Will Take You on a Tour' (我帶你遊山玩水).

Directed by dramatist Wang Chi-mei (汪其楣) and produced by blind soprano Chu Wan-hua (朱萬花), the play is about a woman and her children struggling to pull their lives together after the death of her husband.

At an audition earlier this year, a cast of 18 actors was selected. Thirteen visual- and hearing-impaired actors, along with five other performers, have been practicing for the past two months in preparation for the stage play.

The visually-impaired actors were given the script in audio format and they also had to learn sign language in order to communicate with the hearing-impaired cast members, according to Wang, who founded Taiwan's first disabled theater troupe The Taipei Pantomime Company in 1977, and the Seeing Smiling Theatre of the Deaf in 2008.

'I'd never interacted so closely with blind people before. It's a very refreshing experience,' said Michael Chu (褚錫雄), a 61-year-old deaf actor with over 35 years of stage experience.

He said his past performances were focused more on miming, but this time there are more voice and sign-language parts in the play.

'I hope the performance will show the audience a different side of deaf and blind people,' said Ouyang Lei (歐陽磊), a 31-year-old deaf actor.

Blind actor Chang Che-jui (張哲瑞) said he previously could not imagine having deaf friends because of the communication challenges.

The most rewarding part of the experience is building friendships 'that you never thought were possible,' the 28-year-old added.

These actors 'may be blind or deaf on the outside, but not on the inside,' she stated, saying attending the play could help people overcome their prejudices and dispel fallacies.

The play is part of the Ministry of Culture's 'No More Barriers' project that promotes literature and reading among disabled groups and special education schools.