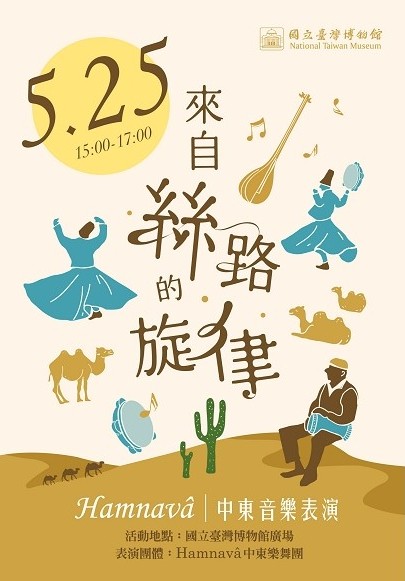 A two-hour concert titled "The Sounds of Silk Road,” featuring the Hamnavâ Middle Eastern Drum Ensemble, will take place at the National Taiwan Museum plaza on the afternoon of May 25.

One of the main stars of the show will be the oud, a pear-shaped stringed instrument that is considered the precedent of the modern guitar. The 3-to-5 PM concert will also offer a variety of music, ranging from somber and meditative pieces to festive music that will be accompanied by dance performances.

"The Sounds of Silk Road” concert is part of the fringe activities organized by the National Taiwan Museum in conjunction to "The Exhibition of Islamic Life and Culture,” the first comprehensive Islamic exhibition in Taiwan.