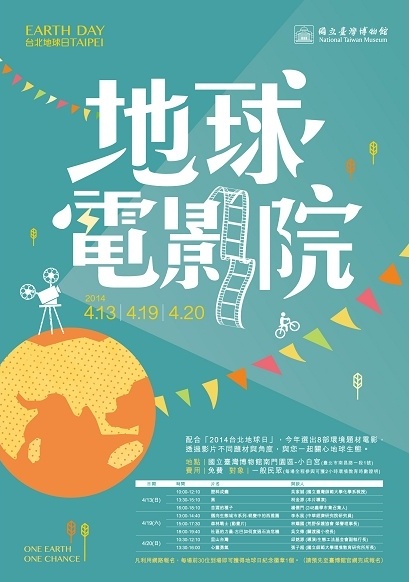 To celebrate Earth Day, which falls on April 22, the National Taiwan Museum will hold a three-day film festival at its South Gate Park. A total of 8 environment-conscious movies and documentaries will be aired on April 13, 19, and 20.

The Canadian documentary "Addicted to Plastic” will open the Earth Day film festival on April 13. Filmed in 12 nations on five different continents, the 85-minute production explores realistic solutions — including biodegradable plastic made from plants — that can end humanity's reliance on plastics.

The 2012 American drama "Promised Land” will be the closing film of the festival. Starring Hollywood actor Matt Damon, the movie reveals the extent of manipulation and deceit funded by oil and natural resources corporations.

Between the opening and closing films, several Taiwanese productions will also be shown to the public. This year's lineup includes "Black” (紀錄片「黑」), a documentary on the hazards of heavy metal contamination in Taiwan, and "Satoyama” (里山台灣), an aerial capture of a remote Taiwanese village's success in adopting organic farming.

On the weekend of April 19 and 20, the museum will also play host to open-air music performances, creative market stalls peddling eco-friendly wares and second-hand items, environmental lectures, and art workshops.