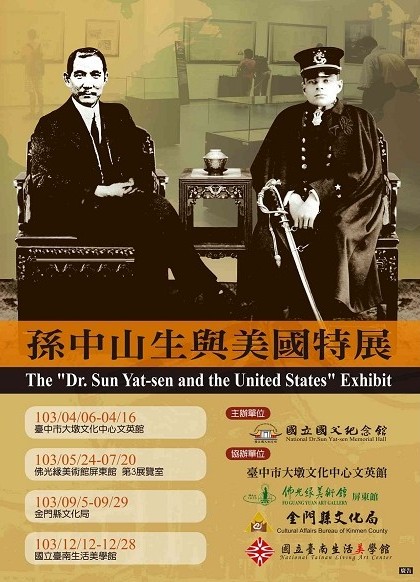 The National Dr. Sun Yat-sen Memorial Hall and the Cultural Affairs Bureau of Taichung City Government will jointly present a traveling exhibition titled "Dr. Sun Yat-sen and the United States” at the Taichung Municipal Dadun Cultural Center from April 6 through 16.

The exhibition, the first of its kind, will display historical documents and artifacts that show the strong bonds between Dr. Sun, the great leader of modern China, and the United States, where he once studied. The U.S. National Archives, the Hoover Institute, and the family of Homer Lea, a close advisor to Dr. Sun, have all loaned valuable items for this exhibition.

The most outstanding feature of this exhibition is that many documents and photographs will be disclosed to the public for the first time, thereby presenting the entire history of Dr. Sun's travels to America in preparation for the Xinhai Revolution.

The historical documents on display include a birth certificate issued on March 14, 1904 indicating that Sun Yat-sen was born on Oahu Island, Hawaii, on Nov. 24, 1870. The fictitious paperwork enabled Dr. Sun to travel from Hawaii to San Francisco as a U.S. citizen when the imperial Qing Dynasty issued an arrest warrant for his attempt to overthrow the royal regime.

Dr. Sun did spent a lot of time in America, during which he attended school in Hawaii where his elder brother lived and later rallied support and raised funds for a series of revolutions that eventually succeeded in overthrowing China's Qing rulers, ending thousands of years of imperial rule.

Last but not least, his Three Principles of the People theory — which advocated building a China that sets nationalism, democracy and people's livelihoods as its top priorities — was inspired by U.S. President Abraham Lincoln's 1863 Gettysburg Address.

"Dr. Sun Yat-sen and the United States” will then travel to Pingtung County between May and July; to the outlying Kinmen County in September; and to Taitung County in December.