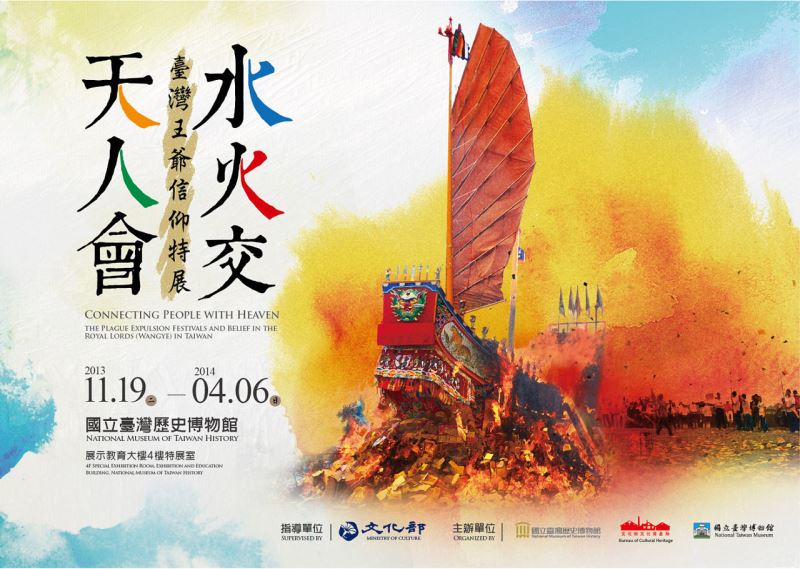 Hosted by the National Museum of Taiwan History in Tainan City, "Connecting People with Heaven” will feature in-depth information and analysis of Taiwan's Wangye ("Royal Lords”) sect, one of the most popular folk beliefs in Taiwanese society, and the associated Plague Expulsion Festivals.

Between Nov. 19 and April 6, 2014, over 700 pieces of historical relics on loan from 20 museums, temples and private collectors will be on display at the Tainan museum. "Connecting People with Heaven” will explain Taiwan's cultural rituals and uncover the mysteries shrouding the Royal Lords.

Wangye (literally "God's Men”) are worshipped as divine servants who came to carry out the gods' works in the mortal world. Capable of warding off pestilence, disease and other undesirables, they are believed to be on the hunt for vengeful spirits and evil manifestations. To appease these supernatural beings, Taiwanese worshippers often burn paper money, incense and the occasional wooden boat or two.

Today, a large number of people still participate in the Wangye celebrations, which have helped strengthen local communities, preserve local traditions and boost tourism; in fact, the Plague Expulsion Festivals are part of the island's most distinctive local events. The festivals are considered a reflection ofthe bonds between Taiwan's early settlers and the ocean, the perceived relationships between gods and men, and the social ties among individuals.

The exhibition is divided into four main sections - "Water: Stage for the Royal Lords' Plague Expulsion Festival,” "Fire: the Royal Lords' ceremonies and plague expulsion,” "Heaven: Gods patrolling on behalf of the celestial powers,” and "People: Community and participation.”

At the exhibition opening on Nov. 19, the National Museum of Taiwan History thanked the participating museums and private collectors for lending their relics. "Connecting People with Heaven” includes artifacts on loan from the National Museum of Natural Science, the Institute of Ethnology, Academia Sinica and the Donglong Temple in Pingtung.

You can download a free copy of the event's bilingual program from below: