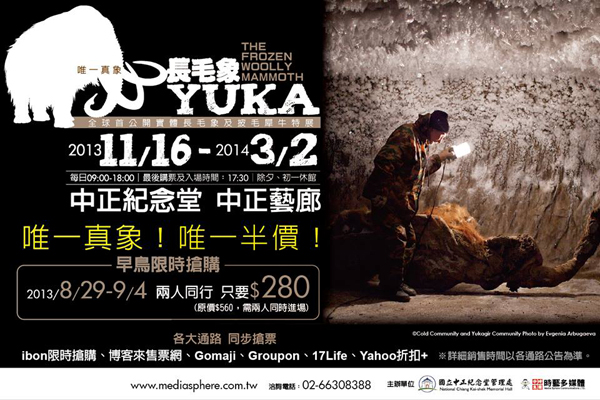 More than 200 prehistoric animal specimens and objects used by ancient tribes will be displayed at the National Chiang Kai-shek Memorial Hall from Nov. 16 through March 2, 2014.

Among the most-anticipated specimens are a woolly mammoth and a rhinoceros that were frozen in permafrost after their deaths, with both dating back to more than 39,000 years ago.

The female mammoth, about three meters long and 1.65 meters tall, is estimated to have died at the age of 10 and its skin, trunk, tail and four legs remain in good condition. Scientists were also able to obtain liquid blood and muscle tissue from the mammoth and remove a well-preserved brain from its skull for further studies.

Meanwhile, the woolly rhinocerosnicknamed 'Kolyma' was discovered in the lower Kolyma River in northeastern Siberia in 2007. Measuring 2.9 meters long and 1.2 meters tall, the female rhino is estimated to have died at around the age of 20.

Prior to Taiwan, the extinct creatures were exhibited in Japan, where they attracted hundreds of thousands of people.

Yoshihiro Ota, chief executive officer of the Tokyo-based Nature's Network Co., one of the organizers, said he hopes the exhibition will attract many children in Taiwan, as it did in Japan.

Former Taipei Zoo Director Jason Yeh also urged the public to attend the exhibition to learn more about the creatures that once roamed the earth.

'Many precious animals are facing the threat of extinction today,' Yeh said, adding that he hopes the exhibition will also encourage people to cherish the earth and do more to protect the environment.

Among the other items that will be displayed are the skeletons of antelopes, bison and saber-tooth cats from the Pleistocene epoch, which lasted from about 2.58 million years ago to 11,700 years ago. 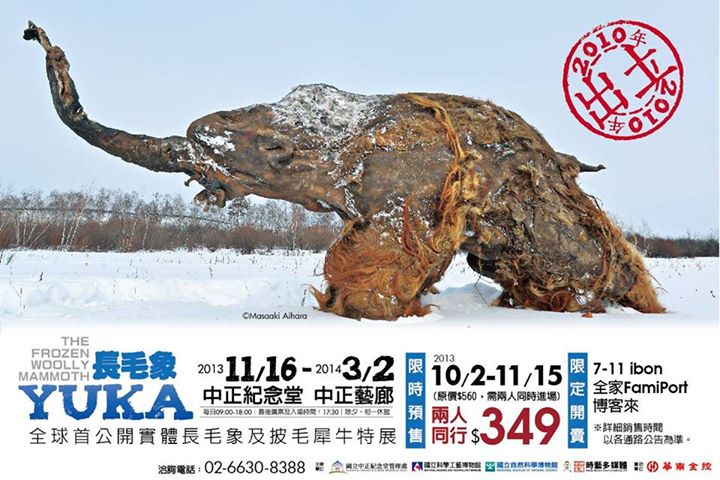