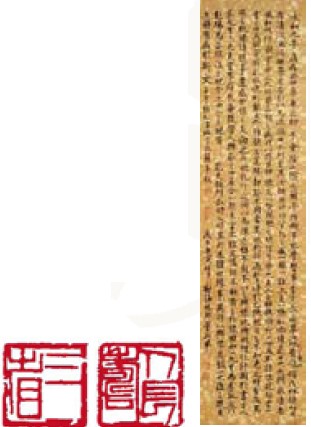 Tung Hsiang-fei, a former Grand Justice of the Republic of China (R.O.C.), will hold an exhibition displaying his calligraphy and seal carvings to celebrate reaching the age of 80. The exhibition will run from Oct. 25 through 30 at the National Dr. Sun Yat-sen Memorial Hall.

Born as a farmer's son in July 1933 at China's Jiangsu Province, Tung moved to Taiwan with his family in 1949. He was appointed the sixth Grand Justice in 1994 and retired in 2003 after serving as a public servant for a total of five decades.

When serving as a Grand Justice, Tung was awarded a top national award for proposing 18 different explanations for several controversial points included in the Constitution.

In addition to having once revised the R.O.C. Constitution, Tung enjoys a prestigious reputation in both the education and law communities. His education sparked his interest in calligraphy and he later became interested in carving seals as well.

During the past six decades, he had completed nearly 600 individual seals, some of which have already been exhibited several times in Taiwan and mainland China.

The exhibition will display over 120 of his more recent works and an opening ceremony will be held at the memorial hall's Yat-sen Gallery at 2:30 PM on Oct. 26.