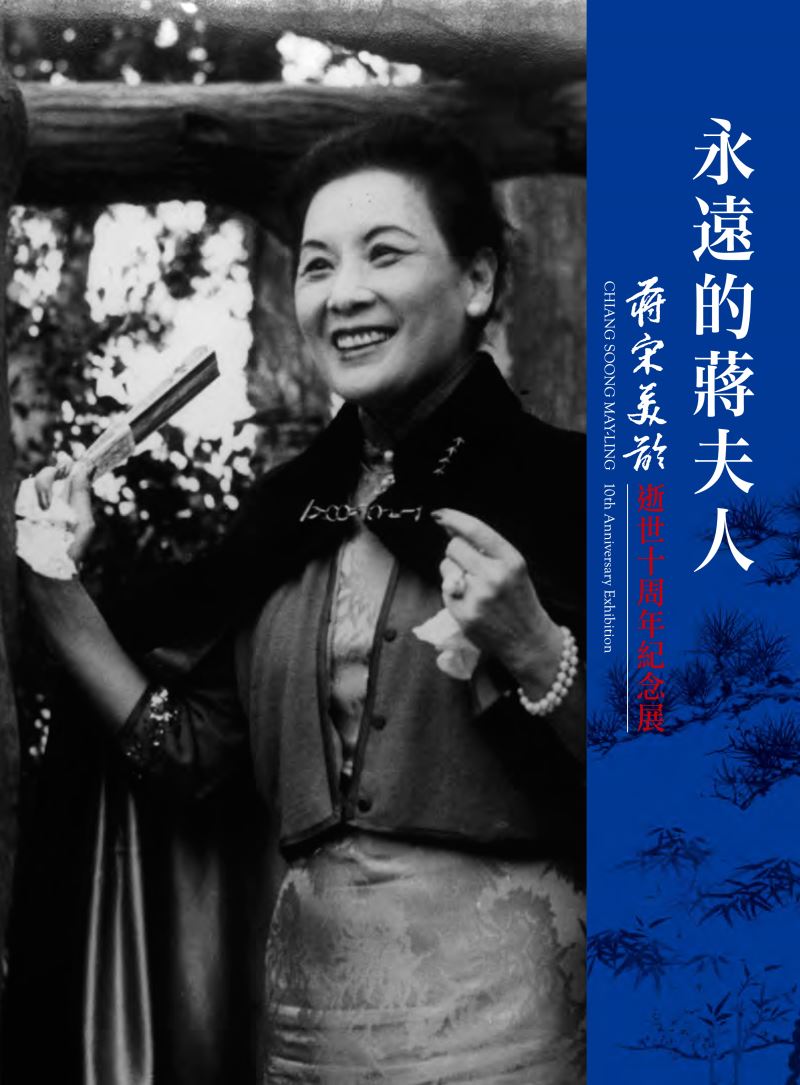 Madame Chiang, whose birth name was Soong Mei-ling, was born in Shanghai on March 5, 1898. She was the fourth of six children of Charlie Soong, a wealthy businessman and former Methodist missionary, and his wife Ni Kwei-tseng. She studied at Wesleyan College in the U.S. state of Georgia and Wellesley College in Massachusetts, graduating with honors. She devoted herself to church charity work and social services after returning to China.

On Dec. 1, 1927, her grand wedding with Generalissimo Chiang Kai-shek at the Da Hua Hotel in Shanghai was witnessed by more than 1,000 guests, who gave the couple a great variety of gifts. Among the wedding gifts on display at the exhibit are two silver goblets presented by Wang Qingwei and Sun Fo, who headed the Kuomintang government in Wuhan as a rival of Generalissimo Chiang's government in Nanjing. These gifts are known as 'Goblets of Reconciliation.' Inscribed on Wang's goblet is the congratulatory note, 'Hearts Bound Together,' while the inscription on Sun's reads 'Base for Peace.'

Madame Chiang made several tours to the United States to lobby support for the Nationalist war effort, drawing large crowds with each appearance. In 1943, she was featured on the cover of TIME magazine for a third time, and also attended the historic 1943 Cairo Conference with her husband.

Madame Chiang and her elder sister Soong Ai-ling gave a pair of pandas to the U.S. in appreciation of the ally's support for China during the Second Sino-Japanese War and its help to rescue tens of thousands of Chinese refugee children. The Americans were deeply touched by the gift and the gesture became a memorable event in R.O.C.-U.S. diplomatic history.

In addition, Madame Chiang worked hand-in-hand with Generalissimo Chiang to develop the country. In her private life, she was an art lover who learned Chinese brush painting from expert maestros and even opened her own exhibitions.

The National Women's League of the R.O.C., the Chung Cheng Foundation and the Chiang Kai-shek Memorial Hall organized the special exhibition to commemorate the 10th anniversary of her death on Oct. 23, 2003.

The memorial exhibition features eight sections that cover the Chiang-Soong marriage, their family life, their Christian beliefs, Madame Chiang's commitment to the women's movement and her elegant life. The exhibited items include over 190 photos and more than 60 pieces of memorabilia that have seldom or never been seen in public. The opening ceremony is scheduled to take place at 3:00 p.m. on Oct. 23.