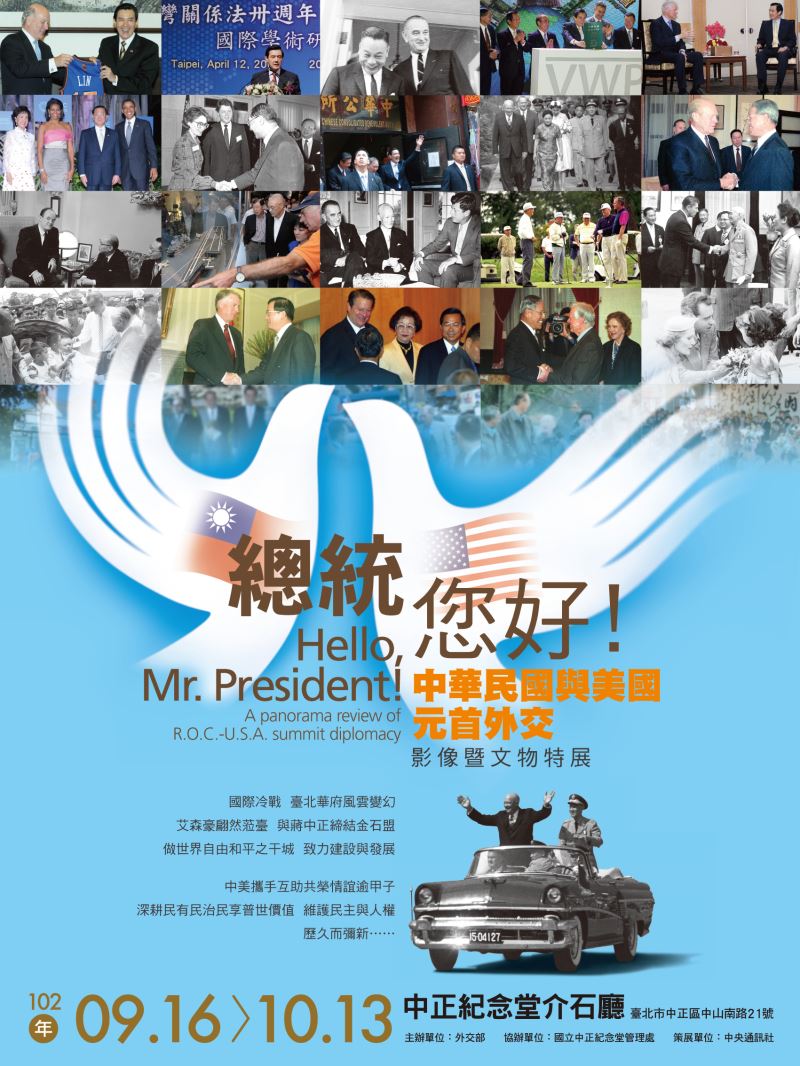 Historic photos and documents that trace key events in the relationship between Taiwan and the United States will be on display at the National Chiang Kai-shek Memorial Hall from Sept. 16 through Oct. 13.

The exhibition, titled 'Hello, Mr. President!' reviews milestones in bilateral ties since 1949, when the Republic of China government relocated to Taipei, according to the event organizer, the Ministry of Foreign Affairs.

The exhibition aims to promote public understanding of the long-standing relations and interactions between Taiwan and the U.S., Foreign Minister David Lin said at the opening ceremony.

Over the past decades, the U.S. has remained a solid ally of Taiwan, Lin said, adding that American support and assistance have contributed to the development of Taiwan.

'This exhibition provides a retrospect on the opportunities and challenges our two nations have faced together in the past,' Lin said.

Some of the 180 photos on display, including 163 provided by the Central News Agency, feature late U.S. President Dwight Eisenhower's visit to Taiwan in 1960 and Madame Chiang Kai-shek's speech to the U.S. Congress in 1943.

'It's an honor to celebrate the friendship of the U.S. and Taiwan,' she said, while praising the development in Taiwan.

Citing a prayer in her grandfather's farewell address as President in 1961, she said 'I see his prayer come true in Taiwan every time I am here.'

In the address to the American people, Dwight Eisenhower prayed that in the goodness of time, all peoples will come to live together in a peace guaranteed by the binding force of mutual respect and love.

At the opening ceremony, Ma said Taiwan and the U.S. share common values such as freedom, human rights and the rule of law. Since he took office in 2008, both sides have also made significant progress in exchanges in trade, security and other areas, he added.

The exhibition provides an opportunity to reflect on the past and contemplate the future, Ma said, adding that he expects bilateral ties to continue to grow.

Many foreign officials based in Taiwan also attended the opening ceremony, including Christopher Marut, director of the American Institute in Taiwan's Taipei Office.

The exhibition recalls a great number of visits and exchanges between the U.S. and Taiwan over the past decades, Marut said.

Both sides have continued to develop 'stronger and stronger ties' over time in education, cultural, economic and security exchanges, he said.

Photos of monumental events shown at the exhibition include late U.S. President Richard Nixon's Taiwan visit when he was still vice president, and Lee Teng-hui's trip to the U.S. in 1995 - the first visit from an incumbent R.O.C. president.

The photos and other items of historic interest will be on display free of charge through Oct. 13 at the Chiang Kai-shek Memorial Hall. For more information, please visit the event website here.