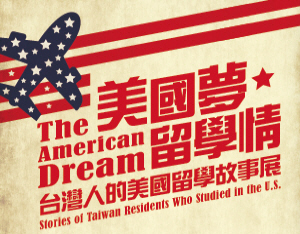 "The American Dream: Stories of Taiwan Residents Who Studied in the United States,” an exhibition showcasing the contributions that Taiwanese students have made to their homeland after returning home, will be held in Taitung from Sept. 12 through Nov. 24.

The stories of Taiwanese citizens realizing their dreams of studying in the United States were jointly organized by the Kaohsiung branch of the American Institute in Taiwan (AIT), which represents U.S. interests in Taiwan in the absence of official ties, and the National Sun Yat-sen University (NSYSU).

The exhibit will be shown at the National Museum of Prehistory in Taitung starting Sept. 12. This is the second leg of the exhibition's tour - it was previously hosted by the Kaohsiung Museum of History last year.

Some prominent examples included in "The American Dream” exhibit are: incumbent President Ma Ying-jeou, former President Lee Teng-hui, and author Yu Kwang-chung, each of whom earned degrees from the U.S. before pursuing their respective careers in Taiwan.

While many Taiwanese students seek educations abroad, the overwhelming favorite destination in the past has been the United States, but getting there has never been easy.

Prospective students had to prepare funds for their studies before undergoing a thorough interview with a U.S. official to obtain a visa - an experience described at length at the exhibit, among others.

The exhibit is set to run through Nov. 24. For those of you who cannot make the trip to Taitung in time, however, check out the virtual tour provided by the AIT here.