A special exhibition featuring royal treasures from the Qing Dynasty will be held at the National Dr. Sun Yat-sen Memorial Hall from July 5 through Sept. 29. Jointly organized by the Memorial Hall and Bright Ideas Design, the exhibition will display the cultural relics of the Old Summer Palace, known in Chinese as Yuanmingyuan (literally, "Garden of Perfect Brightness”).

The organizers conducted three years of research and development, combining historic objects with digital technology for the first time; Taiwanese collectors also provided items worth at least NT$600 million (US$20 million) for the exhibit.

Yuanmingyuan has been a hot topic for both art lovers and historians. The exhibition presents the results of the many studies of the imperial garden to date, which are displayed in a variety of forms from artworks, letters and photos to multimedia.

Visitors will travel back in time virtually by watching how the Qianlong Emperor was inspired to design his most impressive garden during a southbound trip to Hangzhou. Chinese and Western customs and styles of this period are also one of the themes of the exhibition, with Yuanmingyuan serving as a notable example.

Visitors will also see the design and architectural drawings of gardens in the Qing Dynasty and a virtual reconstruction of the damaged Old Summer Palace. Through the use of multimedia technology, an animated Yongzheng Emperor will introduce visitors to his life in the royal garden.

During the preparation period, the organizers persuaded overseas museums and collectors across the Taiwan Strait to loan items from their collections, including a Chinese cloisonné qilin, or Chinese unicorn, an item of great artistic and monetary value. The matching cloisonné qilin of the pair is from the collection of the Château de Fontainebleau in France. The qilin's body is made of ocean blue enamel and decorated with royal blue enamel, and its scales are constructed with bronze wire.

Also on display is a gilded pocket watch, encrusted with pearls and jewels, which belonged to the Qianlong Emperor. The engraved words - "Loot from Summer Palace Peking Oct. 1860. Capt. James Gunter, King's Dragoon Guards.” - on the watch indicate that it was an object taken from the palace. An exhibited antique 19th century silver jug from the United Kingdom has also been determined to be made of silver from Yuanmingyuan. 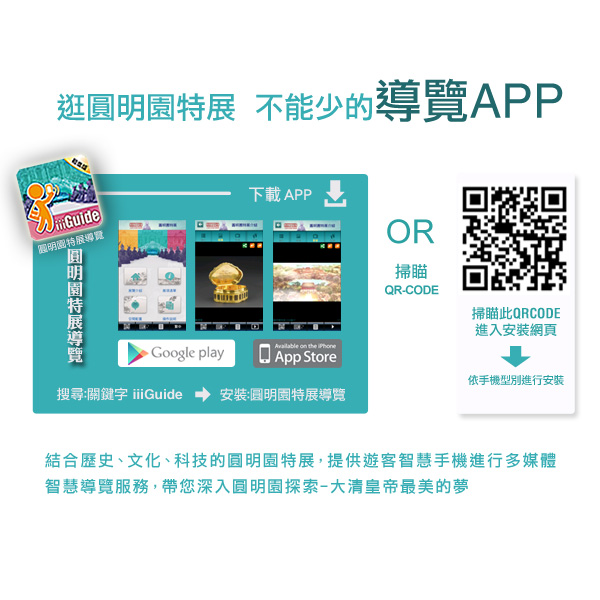