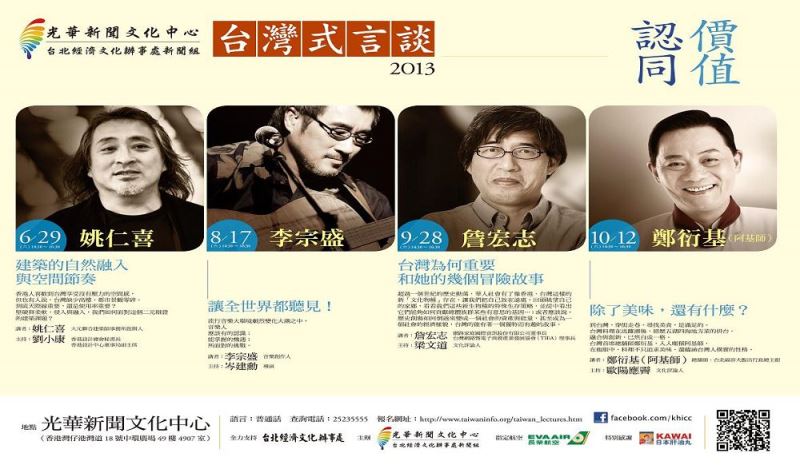 The Kwang Hwa Information and Cultural Center in Hong Kong, a subordinate organization of the Ministry of Culture, will be hosting a second series of cultural dialogues between June 29 and Oct. 12.

"Taiwan was formed by strong civic influences, the foundations of which are the values commonly adopted by all citizens,” Lee Ying-ping, director of the cultural office in Hong Kong, pointed out.

The first set of the 2013 Taiwanese Dialogue Series featured well-known figures such as Chinese-American physicist Paul Chu. The second series will include experts from the fields of architecture, popular music, business and culinary arts.

Taiwan's Yao, Lee, Chan and Cheng, who will share their personal principles in tangent with the collective values of Taiwanese society, are scheduled for four cultural forums that will be respectively hosted by Hong Kong's Lau, Shum, Leung and Auyeung.

Yao will start the dialogue series with "The Natural Integration of Architecture and the Rhythm of Spaces” on June 29, in which he will explain his humanistic approach towards the conflicting concepts of invasion and integration.

"Loud and Clear,” the title of Lee's piece on Aug. 17, will compare the different types of pop music from the greater China region from a Taiwanese perspective. Lee, who has been one of the most influential musicians in Taiwan since the 1980s, will also share his experiences on surviving in the volatile music industry.

Chan will follow with "The Importance of Taiwan and Her Less-Documented Adventures” on Sept. 28. As the founder of the first websites for news and shopping that were oriented towards a Chinese readership, Chen will elaborate on how Taiwan and Hong Kong has helped reshaped the Chinese-speaking world as we know it today.

Taiwan's top celebrity chef Cheng Yen-chi, better known as Master Ah-chi, will wrap up the dialogue series on Oct. 12. "The Missing Ingredient” will explore the secrets of Taiwanese cuisine, in which more than just fresh produce are needed to replicate its unique taste.