A rock musical co-produced by Chinese writer Gao Xingjian, the 2000 Nobel Laureate for Literature, will be staged in Taipei in June. The play will bring together performers from both sides of the Taiwan Strait in a fascinating rendition of ancient Chinese mythology.

The musical was adapted from Gao's 1992 play "A Tale of Shan Hai Jing,” which is based on a classic Chinese text of the same name. Roughly translated as "Canon of Mountains and Seas,” the ancient manuscript contains mythological accounts that range from fanciful to bizarre.

According to the National Taiwan Normal University (NTNU), one of the producers of the rock musical, the reenactment will include Houyi, a hero who shot down nine suns; Kua Fu, a giant who tried to chase and capture the sun; and legendary ruler Yu the Great, who was reputed to control floods at will.

Chinese singer Duan Xuming, Beijing opera star Chu Lu-hao, soprano Ho Kang-ting and NTNU students have been cast for the play, which is being jointly produced by Gao and the university.

Hong Kong musical director and composer Chris Babida, lyricist Chen Le-jung and Liang Chih-min, founder of the Godot Theatre Company and associate professor at the university, are also working to bring the musical to life.

The idea of using rock music to reinterpret Chinese legend came straight from Gao. The concept was fully embraced by Godot Theatre founder Liang, who pointed out that rock is one of the best ways to express the spirit and ambitions of ancient times.

"A Tale of Shan Hai Jing” will be staged from June 28 to 30 at the National Theater Hall within the National Chiang Kai-shek Memorial Hall. Ticketing information can be found atwww.artsticket.com.tw/. 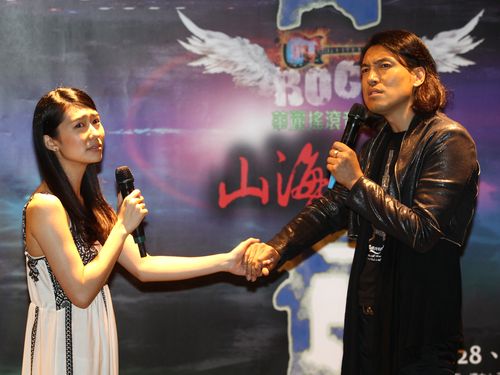