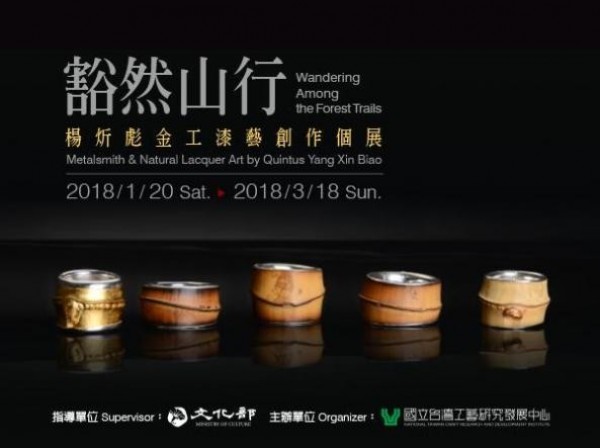 Quintus Yang (楊炘彪), an award-winning metalsmith known for his effortless blend of crafts skills and diverse materials, will hold a solo exhibition in Taipei from Jan. 20 through March 18.

Born in Tainan and raised in Kaohsiung, Yang grew up in a silver shop ran by three generations of jewelers. He became a crafts apprentice at the age of 14, founded an independent studio in Kaohsiung in 2005, and went on to be named the rising star of local crafts in a top hundred poll compiled by China Times as part of the Republic of China’s centennial celebrations.

Yang is particularly skilled at metal inlays and lacquer embedment, and his preferred combination of metals and alloys, bamboo, and glossy lacquer give rise to a distinct and ambitious set of aesthetics. Moreover, the 42-year-old takes inspiration from both western innovations and eastern traditions, employing techniques encompassing enamel firing, bamboo weaving, and lacquer layering.

In this Taipei exhibition, the featured 55 pieces have their origins in moments where Yang sought inspiration from Taiwan’s mountains, forests, flora, and starry skies. His crafts take the form of mostly tea sets and accessories.

Exhibition host, the National Taiwan Craft and Research Institute’s Taipei Branch, first noticed Yang when he was shortlisted for the Taiwan Crafts Competition in 2001. The unyielding metalsmith than became the youngest winner of the same competition six years later.

Apart from teaching at Kaohsiung-based Tung Fang Design University, Yang is now entering his eighth year as a resident artist at the NTCRI’s forging station, where he mentors both professional and first-time metalsmiths interested in shaping metal, learning new tricks, and incorporating different materials.