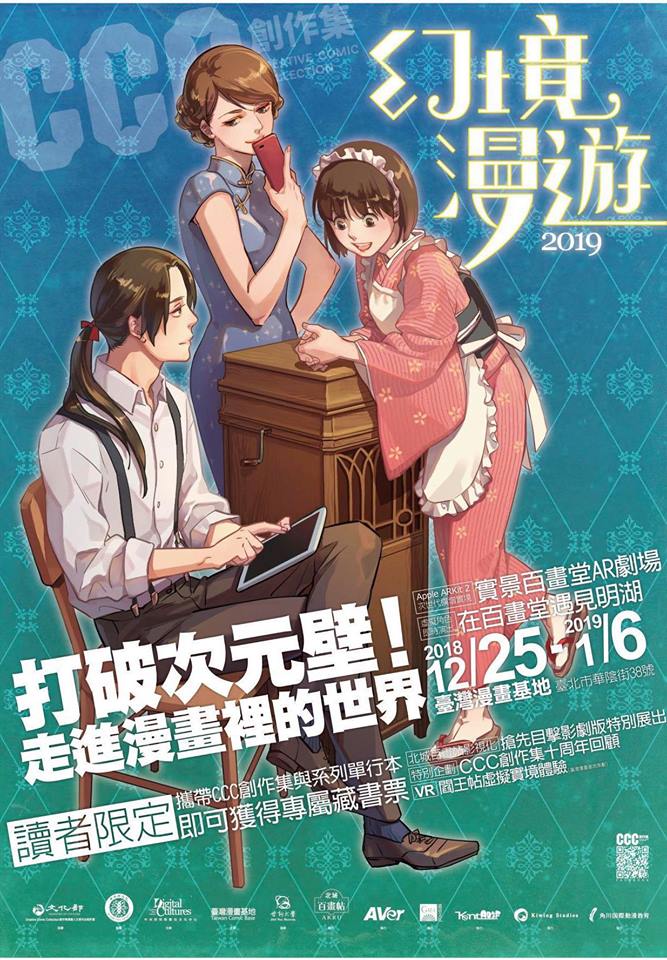 Taiwan Comic Base will celebrate the 10th anniversary of Taiwan's top comics collective with a special exhibition that reimagines the old sights and scenes of Old Taipei through augmented and virtual reality and stunning artwork.

Marking its first decade of collective creation this year is Creative Comic Collection (CCC), an iconic magazine featuring comics by local artists that take inspiration from Taiwan's history, culture, and nature. The periodical-turned-monthly is credited with reviving the "longform" of original Taiwanese comics with its serialization.

To showcase the best materials published in the magazine — a total of 30 issues so far — a multimedia wall has been transformed into a digital book depository for exhibitiongoers to browse through the extensive collection of original works. The depository also includes an interactive message board that holds personalized notes and autographs from the featured artists, to which visitors can add their own thoughts and well wishes.

To explore the AR and VR applications of comics, the exhibition will also incorporate 3D models of Taiwanese cultural sites and landscapes from the Taiwan Digital Asset Library (TDAL) that was launched this year by the Ministry of Culture and the Ministry of Science and Technology.

For example, the exhibition will offer an exclusive preview of the upcoming film adaptation of "Scrolls of a Northern City," a Golden Comic Award-winning graphic novel by artist AKRU. The film will include the artist's vision of Taipei in the 1930s, and feature the original façade and interior design of Kikumoto Hyakkaten, Taiwan's first-ever department store that has been digitally recreated by TDAL.

Movie props, costumes and stage design, and behind-the-scene videos from "Scrolls of a Northern City," which is set during the Japanese colonial era of Taiwan, will also be on display for exhibitiongoers to see how original comics can be combined with global technology and local talent to bring new life to the nation's history and cultural heritage.

Visitors who bring a copy of CCC's magazines or serialized publications to the Taiwan Comic Base during the exhibition will be gifted with a set of limited-edition bookplates. And those who partake in the VR immersion game based on Taiwanese comics will also have the opportunity to receive specially designed postcards and notebooks.