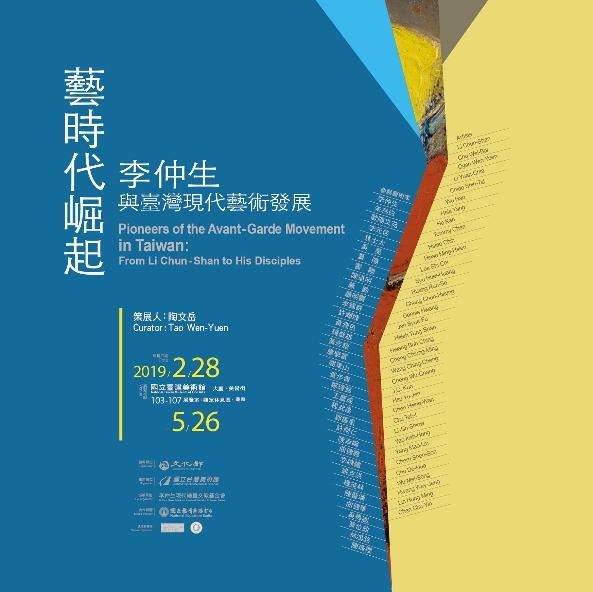 The National Taiwan Museum of Fine Arts will spotlight Li Chun-shan (李仲生), the mentor of Taiwanese modern painting, and his disciples in a grand exhibition encompassing a riotous profusion of forms ranging from drawing, watercolor, ink wash, and oil painting to ceramics, mixed media, sculpture, installation and digital interaction from Feb. 28 through May 26.

Held in deep reverence as "the mentor of Taiwanese modern painting," Li (1912 – 1984) was not only an excellent artist but also a great educator. His oeuvre welded together surrealist ideas, automatism, abstract painting, and Sigmund Freud's account of the unconscious mind, channeling his personal consciousness to create engrossing compositions characterized by unpretentious lines and imbricated layers of colors.

Li's mentorship was different from the traditional academic training that was prevalent across Taiwan, distinguished by his pedagogical approaching of teaching in line with the disciple's unique set of abilities. The mentorship was further exemplified by his celebrated one-on-one teaching method.

Li promoted his modern art pedagogy across the nation in a comprehensive manner. He not only taught the fine arts introduction course at the Academy of Fine Arts since 1950, but also published articles in newspapers and magazines, such as "The Prospects of Traditional Chinese Paintings (國畫的前途)" in the inaugural issue of "New Art (新藝術雜誌)."

He also discovered a brick bungalow with a garret located on An-dong Street in Taipei's eastern district in 1951 and established his atelier in a space of 26.5 square meters there. Small, simple, dim, and humid notwithstanding, it became a sacred place for modern art enlightenment as far as he was concerned — a holy temple for achieving his ideal teaching of avant-garde art.

They founded the East Painting Association (東方畫會) in 1956, and staged their first joint exhibition at the Taipei News Building a year later, sending vibrations throughout Taiwan's conservative environment in November 1957. From thereon, they became known as the "Eight Great Outlaws (八大響馬)." The East Painting Association grew to become one of the pioneering avant-garde painting syndicates in Taiwan, and stood as an equal to another avant-garde painting association known as the Fifth Moon Group (五月畫會). The development of Taiwan's modern art peaked in the 1960s due to their collective promotional effort.

Due to pain inflicted by rheumatism, Li stopped teaching at his atelier in Taipei and moved to Changhua in 1955. By 1957, college students and artists began going south to sit at his feet or discuss art with him there. Combined with his "coffeehouse-based one-on-one teaching method," this pedagogical approach of "spirit perpetuation" was eventually put into practice and flourished in Changhua during his late years.

Today, his disciples have carved out promising and ambitious careers as professional artists. They have either pursued advanced training here or abroad, delivering outstanding teaching and exhibition achievements and deepening the foundation of modern arts that their mentor laid down in Taiwan.

In honor of the legacy bestowed by Li and his students, a 35-artist collective exhibition titled "Pioneers of the Avant-Garde Movement in Taiwan: From Li Chun-Shan to His Disciples" will be held at the National Taiwan Museum of Fine Arts from Feb. 28 through May 26 to embrace a rich diversity of works by these admirable artists.

‘Pioneers of the Avant-Garde Movement in Taiwan’