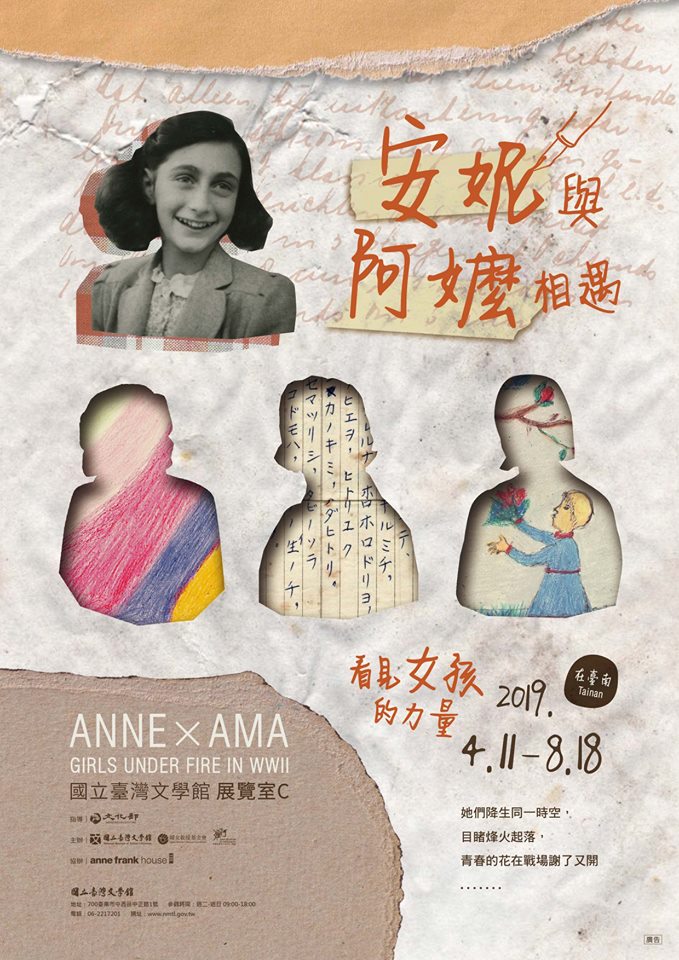 In cooperation with the Anne Frank House in the Netherlands, the National Museum of Taiwan Literature (NMTL) and Taipei Women's Rescue Foundation's Ama Museum will be holding an exhibition titled "Anne X Ama — Girls under Fire in WWII" at the Tainan-based NMTL from April 11 to Aug. 18, 2019. This exhibition will showcase a manuscript copy of Anne Frank's diary and a reproduction of Anne's life in the Secret Annex, coupled with artistic creations on the pains faced by Taiwanese comfort women during World War II.

NMTL Director Su Shuo-bin (蘇碩斌) noted that while Anne and Taiwanese comfort women were separated by space and time, there are several similarities, and both have left a legacy of words that have helped encourage respect for human lives and equality for all.

Taipei Women's Rescue Foundation President Theresa Yeh (葉德蘭) added that this will be the first time the TWRF has cooperated with a national-level museum on such a project. By presenting these different perspectives to visitors, the hope is that the exhibition will help keep the stories of these tenacious women from disappearing with the flow of time.

On June 12, 1942, amid the chaos of war, Anne celebrated her 13th birthday with the gift of a red-and-white checkered autograph book. Two days later, she began using the book as a diary, recording her thoughts and feelings under the dark shadow of war. In early July, she and her family moved into a secret room at her father's company, hiding from the Nazis.

Despite having limited room to move, Anne continued to update her diary, telling tales of family conflicts, life in the face of death, and blooming youthful desires with warmth and precocious wisdom. She maintained a steadfast belief in freedom, dignity, and humanity throughout the years. Her final entry was written on Aug. 1, 1944, three days before she and her family were found and captured. She died of typhus in a concentration camp in 1945.

While Anne had wanted to become a writer from an early age, she could never have expected that her diary would become a precious eyewitness account of WWII as one of the "books that changed the world." Through "The Diary of a Young Girl" and the exhibitions, films, and theater plays that it inspired, her legacy lives on today.

At about the same time, on the other side of the globe, girls about the same age also living in a time of war were taken away, forced to become victims of sexual violence as they were shipped away to comfort women brothels — dreams of family, love, and life buried in a strange land. Unlike Anne, however, when the war ended many continued their lives as survivors.

For decades, they had to face mockery, discrimination, and askew glances from those around them, but with courage and resilience they faced the wounds of their pasts head-on, slowly letting go of dark memories and living like the reed plant — bending, but unbroken.

Despite the distance between them, Anne and those comfort women were connected by war. Their experiences will help visitors understand the silence, prosecution, and resistance of humanity in the face of war through the eyes of resolute women, and sense their drive to survive. In a time when everyone was forced to make hard choices, they chose to dream of peace.

The NMTL invites everyone to come together and discover how these amazing women transcended trauma and found the inspiration to move forward. May the scars of history serve as the cornerstone of peace and a global future of respect, equality, and non-violence.