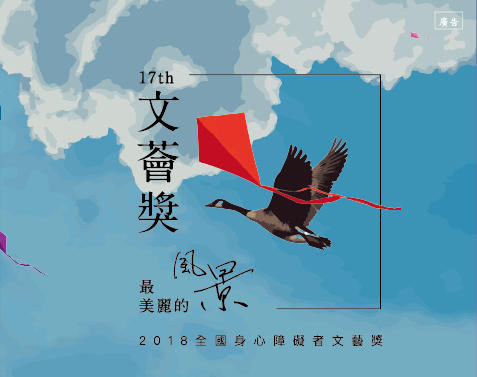 Literary and art creations awarded with the Enable Prize of 2018 will be exhibited from May 21 to 30 at the Youth Social Innovation Base of Chung Hsing Cultural and Creative Park (中興文創園區) in Yilan County, marking the exhibition's first appearance in the eastern Taiwanese county since the prize was established in Taipei two decades ago.

The Enable Prize, or the National Literary Awards for the Physically or Mentally Handicapped, was founded in 1998 by the Council for Cultural Affairs, predecessor of the Ministry of Culture, to encourage citizens with disabilities to express their enthusiasm for life through art and literary creations.

Competition for the prize was held biennially between 2004 and 2010, accounting for why the event only entered its 17th anniversary in 2018. Since 2006, all entrants have been required to hold a disability card.

The 17th competition was tied to the theme "The Most Beautiful Scenery," inspiring contestants to create touching stories from real life or one's imagination with text or pictures. In line with the Ministry of Culture's promotion of equal access to culture for all citizens, many organizations supporting disabled or disadvantaged groups based in Yilan were also invited to participate in the exhibition.

Third-place winner in the high school group of the 2018 competition's picture category is Lin Ting-yu (林庭玉). Lin named his winning illustrated book "Beautiful Lanyang (美麗蘭陽)" after the historic name for the Yilan region, saying that although he is hearing-impaired, he uses his eyes to observe and his hands to introduce the beauty of his hometown.

The awarded works of the 17th Enable Prize competition will tour Tainan, Taipei, and Taichung after the Yilan exhibition. To provide visually impaired visitors with a friendly participatory environment, all of the exhibitions will be equipped with a section at which they can appreciate the works by touching or listening to them.

The Enable Prize celebrates its 18th anniversary this year with the theme "What We Have Gone Through Together." An open call was launched on March 27 and submissions will be accepted through Sept. 5. Please visit the competition's website https://enableprize.chcsec.gov.tw/ for more information.