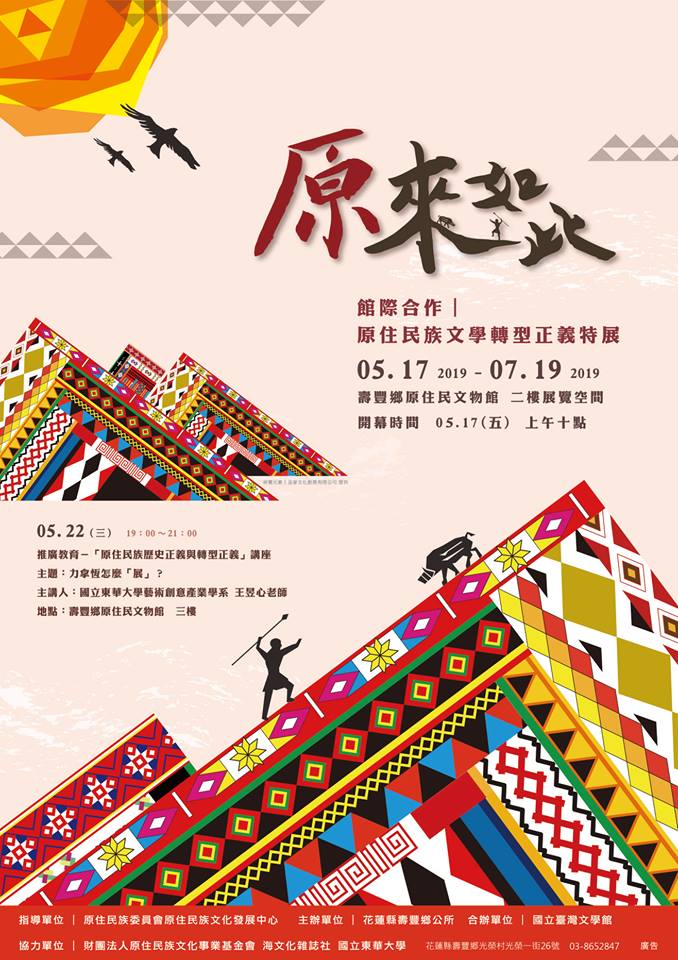 Curated by the National Museum of Taiwan Literature, "Special Exhibition on Indigenous Literature and Transitional Justice" at Hualien County's Soufeng Indigenous Cultural Museum is built around the issue of transitional justice for Taiwan's indigenous peoples, bringing together storytelling and song to cover the themes of land rights, languages and cultures, semantics of names, subversion of history, and inheritance of songs.

Since 2016, the government has launched several projects dedicated to indigenous transitional justice, including the Executive Yuan's recent draft bill aimed at restoring justice and rights for Taiwan's indigenous peoples.

In view of this, the National Museum of Taiwan Literature has launched a traveling exhibition exploring indigenous transitional justice, using the works of contemporary Taiwanese indigenous authors to guide the way in thinking about related issues:

Several professors of indigenous literature participated in the planning of this special exhibition, helping supplant the usual exposition with narratives that incorporate pertinent issues. Images, documentaries, and cross-generational indigenous songs tie the themes of the various sections together while also letting indigenous creators speak on the fates of their tribal groups.

The exhibition also has on display important publications, writings, and chronologies pertaining to the development of indigenous literature, reflecting the development and rise of literary publishing, presenting the efforts of indigenous peoples to regain their right of self-interpretation, and highlighting indigenous rights movements in countries such as New Zealand and Canada to reflect on the future of Taiwan's own movement.

The aim of the traveling exhibition is to provoke the public into contemplating the necessity of transitional justice for the indigenous population of Taiwan. The National Museum of Taiwan Literature welcomes everyone to experience the beauty of indigenous literature and join the movement in securing a future of reconciliation and harmonious co-existence.