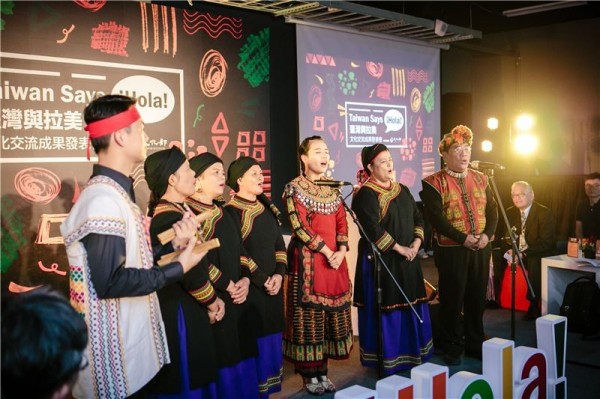 The Ministry of Culture showcased the achievements of Taiwan's cultural exchanges with Latin America at the Taipei-based TAF Innovative Base on Nov. 24.

To enhance mutual understanding in culture, arts, history, and societal norms among communities of Latin America, Caribbean, and Taiwan, the Ministry selected ten Taiwan teams to visit Latin American countries this year for cultural exchanges and art projects through a grants program promoting collaboration among personnel from Taiwan and Latin America.

Director General Wu Shao-kai (吳紹開) of the Department of Cultural Exchanges noted that outstanding achievements were made by Taiwan teams in partnerships with individuals or groups from Argentina, Belize, Bolivia, Chile, Columbia, Mexico, Peru, and Trinidad. He thanked all the teams for engaging in the Latin America program.

The Art Shelter and Cinema, which chose to collaborate with Argentina, invited an Argentinean video artist to hold an exhibition under the theme "Argentina Image.” IDOLON STUIDO (歐亞藝術網絡組織), on the other hand, brought Taiwanese artists to participate in an art residency program in Columbia.

As one of the participating teams, Kaohsiung Film Archive invited film professionals from Chile, Columbia, and Bolivia to join future editions of its film festival in Taiwan.

Kuyeng noted that he learned about how Taiwanese aboriginal communities promote community-building through fair trade from the presentation given by Hualien Kiwit Cultural Development Foundation.

The three scholars suggested the participating teams to harness social media to spread information and opportunities regarding their cultural exchanges.