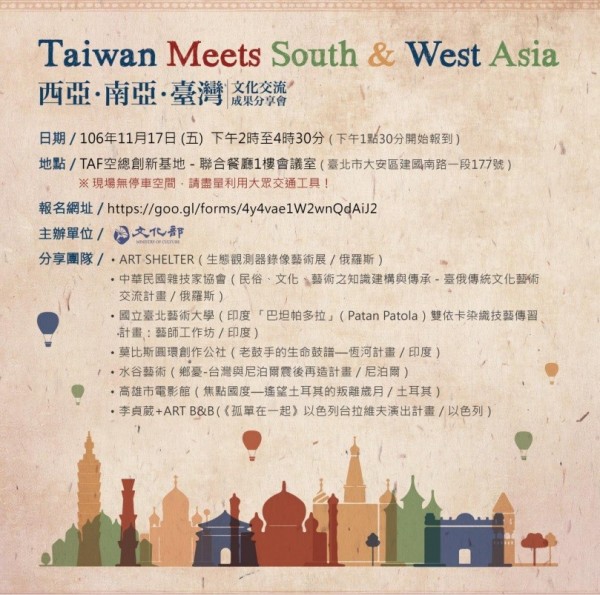 The Ministry of Culture showcased the achievements of Taiwan's recent cultural exchanges with South and West Asia at the Taipei-based TAF Innovation Base on Nov. 17.

To promote deeper understanding of West and South Asia through cultural exchanges, the Ministry of Culture selected seven Taiwan teams to visit Russia, India, Turkey, Israel, and Nepal for cultural and art programs this year through the a grants program promoting collaboration among personnel from Taiwan and West and South Asia.

Director General Wu Shao-kai (吳紹開) of the Department of Cultural Exchanges noted that the exchange program is part of the New Southbound Policy in creating more exchange opportunities with West and South Asia, and broadening the horizons of art and cultural groups in Taiwan.

As one of the teams that visited India, Möbius Strip Theatre (莫比斯圓環創作公社) conducted the "Old Drummer's Life Drum Notes - the Ganges Project” this June in India and turned their survey there into a performance called "TIHAI (暫居).”

The Art Shelter and Cinema, which chose Russia as its partner, held an exhibition and a film screening featuring Moscow at Taipower Building. The Chinese Taipei Acrobats Association (中華民國雜技家協會) also competed and traded skills with Diablo teams in Russia.

Choreographer Lee Chen-wei (李貞葳), who danced with the Batsheva Dance Company for five years, partnered with Taiwan troupe ART B&B (阿特身體與大腦) to organize the performance of her production "Together Alone (孤單在一起)” with Huagarian dancer Vakulya Zoltan in Israel.

Waley Art (水谷藝術), on the other hand, participated in the artist-in-residence program of Gallery Mcube in Nepal, in which two artists conducted field studies and created artworks at the Patan Durbar Square that was seriously damaged by a 7.8-magnitude earthquake in 2015.