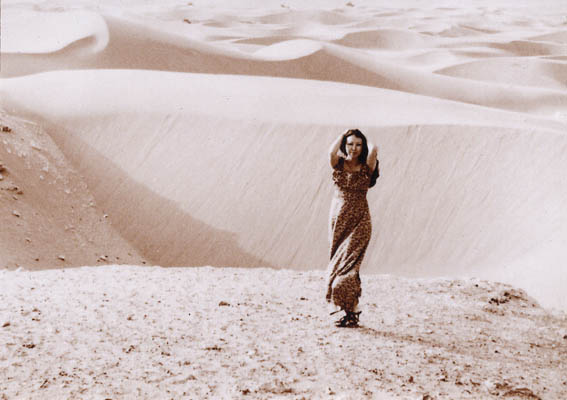 Echoes of a vagrant desert rose

Sanmao (1943-1991) enjoys a special place in Mandarin-language literature. She traveled the world during an era of relatively limited freedoms and introduced her readers to expansive new horizons and possibilities. Her lucidly animated "Stories of the Sahara" is a now a classic of the modern "vagrant literature" genre. Generations have been drawn to her fervid passions and singular perspective on life and the human condition.

For her friends and families, it is not easy to describe Sanmao. Interestingly, she seemed to assume quite different, even contrasting, appearances in their memories — just like a desert rose. In the gusty and sandy desert wind from whence she was born and came, she was like a handful of soft grains; yet once out of the desert she became an enduring stone flower, peculiar and proud.

Her mother, Miao Jin-lan (謬進蘭), spoke of her tender-heartedness, recalling that she might first be mad about receiving a NT$200 quote for one thousand words and reject the offer, only to remember that the magazine was run by some idealistic young people who did not have much capital, and changed her mind to show her support. When other publishers were more courteous and gave her larger sums of honorariums, she just tucked them away without much care.

Her earlier works were also centered heavily on personal pains interspersed by flights of fancy. Solemn purpose was never part of this author’s voice and style. Sanmao's intimate familiarity with her own creative works made writing an intellectual game. Her words were impassioned and charming as well as fresh and absorbing. Her works engage readers with prose that rolls off the tongue.

In her life, few things were more important to Sanmao than travel. At a time when many were still unfamiliar with the idea of "traveling," Sanmao had created her own cartographic stories, leaving footprints in Spain, Germany, Europe, the United States, African Sahara, and Central and South America. She once said, “In my wandering travels, I never sought the idea of the romantic." Instead, she was in pursuit of the ever-changing, ceaseless beauty of the world.

In her enduring autobiography "Stories of the Sahara (撒哈拉歲月)," Sanmao's vivid and heart-rending writing piques curiosity while prompting compassion and sympathy. Wrapped in sorrow and separated from beauty and romance, her tale conceals substantive inner truths. Hers is a crude realism that is capable of making flowers bloom from the arid desert.